Why Do Dogs Walk Away From Their Bowl To Eat?

Every meal my dog - just like countless others - takes a mouthful of food from her bowl, and then briskly walks it over to the carpet, where she finally eats it. And I just don't get it. Why not just eat at your bowl?

She's an only dog, so it's not like she's trying to shield it from the competition. I'm certainly not super interested in eating her food.

As it turns out, it might be more than just an adorable quirk. Like so many canine behaviors, it could be instinctive.

"When dogs in the wild make a kill, the outranked animals drag pieces of food away so they don't have to fight the leader or a more dominant canine for it," Dr. Julie Albright-Keck of the University of Tennessee College of Veterinary Medicine told Vetstreet. "Fighting is obviously very risky, so most animals, especially subordinate ones, will go to great lengths to avoid an altercation."

But what about my dog, who has no one to compete with?

Sarah Wilson, dog expert and co-author of nine books, including "Good Owners, Great Dogs," says she might just be sensitive or nervous.

"This appears to be an urge to take their food to a quieter or more secure area to eat in peace," Wilson told The Dodo. "One of my dogs, PJ, would not take a mouthful away but would pick up her entire bowl to move to a quieter dining spot if she felt stressed."

Stress would make anyone - dog or human - want to leave a situation.

But the behavior could also be attributed to nesting, Jonathan Klein, owner of I Said Sit dog training school in Los Angeles, told The Dodo.

"Almost like a squirrel that stores away food, except that most dogs don't save it, they eat it right away," Klein said.

Your dog could also simply have a problem with the bowl.

"If you're feeding your dog from a metal bowl, it's possible that the clinking sound created by food being pushed around, or a dangling collar tag, may be irritating or upsetting your dog," Dr. Holly Ahlgrim of DoveLewis Emergency Animal Hospital in Portland, Oregon, told The Dodo. "They may be chewing their food away from the bowl to avoid the sound."

In that case, she said, you should consider switching to a bowl made from a different material, such as plastic.

Ahlgrim offered two other solutions if you're bothered by your dog's eating habits (if he's getting food everywhere, for example).

1. Move the dog's bowl to a location that he prefers. This should especially be considered if other dogs are present, as it may help to feed him in a place where there's less chance of any perceived threat or competition.

2. If your dog is comfortable with it, feed him in his crate. The Humane Society offers helpful crate training tips.

But as long as your dog's behavior is not aggressive or causing any harm, simply embrace this as part of her personality.

More than likely, if she's taking food from one room to the other, it's because it makes her happy - and that's really all we could ever want for our best friends. 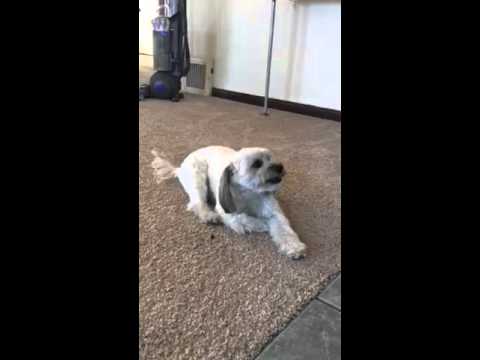