When Sami the German shepherd's humans bring home a live lobster to cook for dinner, she closely guards the little guy - and tries to protect him from any encroaching human hands.

Sami nuzzles the little lobster, hunching over him protectively when her human family reaches down to grab him.

"Don't you dare come near my new lobster baby!"

According to Sami's human, she's "always had a motherly side to her," and loves to snuggle with littler animals. "However we were very surprised to see her act protective over one of the lobsters we had planned to eat for a lobster dinner," he wrote on YouTube.

Sami won't even let her doggie siblings near her new friend. She's serious about guarding this little creature ... claws and all.

While Sami's humans say she's devotedly mothering the lobster, readers and other outlets have pointed out that she may be resource guarding, or acting possessively for reasons other than friendship.

Eventually her humans do take Sami's little lobster baby away, but not before the duo showed that all critters have feelings, no matter their shape or size.

This post has been updated to include input from our readers and the explanation of the behavior from the dog's humans. 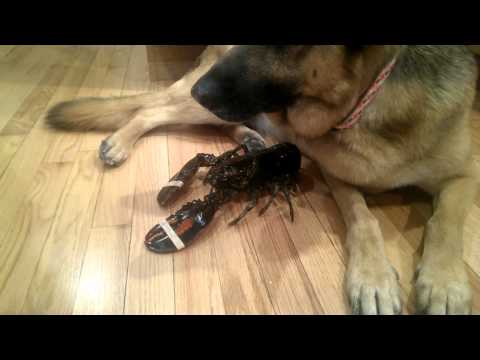