When Angel was rescued, she weighed only 11 pounds. She couldn't walk, and her organs had begun shutting down. Angel was only hours away from death - but she hadn't given up just yet.

Rescue From The Hart, a group based in California, received a call in December 2014 about a dog who had been purposely starved almost to death. They took her in and immediately began to help her, but they were afraid it might be too late.

Angel was very much in danger of becoming an actual angel.

The entire community rallied behind Angel, refusing to let her give up. Even though the situation seemed hopeless, they showed Angel as much love as they could muster.

It took 5 weeks to bring Angel back from the edge of death, but finally she had regained enough strength to take her very first steps towards her new life.

Angel, the dog who no one thought would survive, did more than just that - she thrived. The way Angel looks today is nothing short of a miracle.

Angel is now living with her new forever family, including a dog sibling who she loves more than anything. Thanks to the dedicated volunteers at Rescue From The Hart, Angel was saved from a terrible fate and is living her best life.

The woman who brought Angel in was eventually discovered to be her abuser, and multiple starving, near-death dogs were found living in her home. She was finally arrested last month, nearly a year after Angel had first been taken in.

Angel can finally live without fear, and will prove to her abuser how strong she is every single day from now on.

Check out the full incredible video of Angel's road to recovery below: 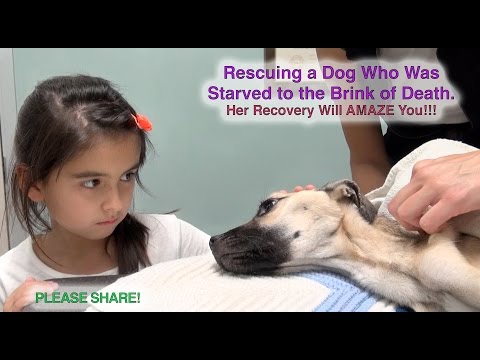