Why Do Dogs Make Weird Noises When They Dream?

When it comes to adorable sleeping sounds, dogs give human babies a run for their money.

They whimper, whine and sometimes even kick their legs as if they're frolicking through a field of treats alongside their best dog friends.

But why do they make those gurgling, bubbly noises while they do it?

"When dogs make noises, or twitch their muscles or eyelids, it's likely that they are in a deep stage of sleep, which is shared by humans called REM (rapid eye movement)," Thompson said. "Their whimpers and noises during sleep may be much like the ramblings of humans when they sleep-talk."

So dogs "talk" in their sleep, but what are they dreaming about?

"Researchers found that a dreaming pointer may immediately start searching for game and may even go on point, a sleeping Springer spaniel may flush an imaginary bird in his dreams, while a dreaming Doberman pinscher may pick a fight with a dream burglar," Coren wrote.

You can determine when your dog is dreaming, or at least in a deep sleep, simply by watching him.

"After a period of about 20 minutes for an average-sized dog his first dream should start," Coren wrote. "You will recognize the change because his breathing will become shallow and irregular."

But enough of that. All we really care about are these amazing gurgles: 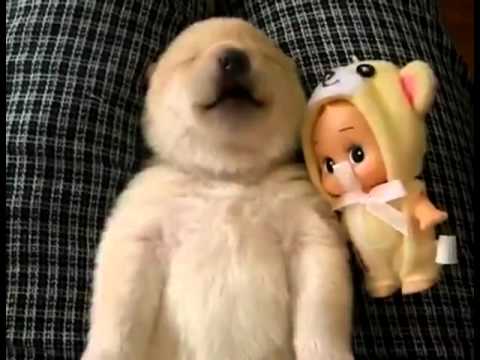