Dog Plays Dead So He Can Stay At The Park Longer

No dog wants to leave the park.

Who would want to trade in a grassy stretch of freedom, where you can frolic with your own kind, for the tedium of indoor living?

Not this dog. He's so attached to this slender slice of liberty, he'll do whatever it takes to stay there.

In a video posted to YouTube back in 2013, this golden retriever gives a master class in acting. He flops to the ground and makes like his time is up, just because, apparently, his time in the dog park is up.

No, I'm afraid I'm quite dead, he seems to suggest. Go on without me.

But his patient owner sees through the charade - it likely isn't the first time the dog flexed his acting chops - and gently tries to lift him off the ground.

No, his owner comes back at him, it's just time to leave.

If only there were some powerful tool or gadget or even an elixir that could bring this dog back to life. If only ...

Yes, a stick does the trick.

A moment later, the dog is nothing short of alive, on his feet and on his way - leaving peals of laughter in his wake.

We don't know exactly where this scene takes place - some YouTube commenters suggest it happened in Piedmont Park in Atlanta, Georgia.

But let's face it. This sort of thing happens in your neighborhood every day. But it takes a special kind of dog to pull off a virtuoso performance. 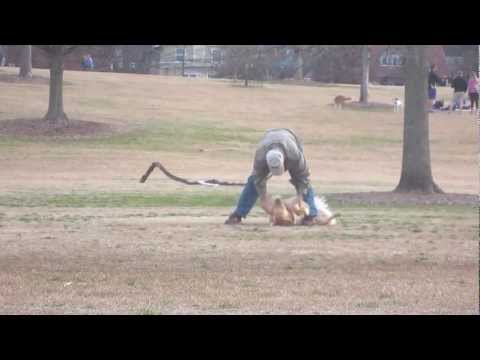