"It seemed like he knew we were there to help and he trusted us."

Goldie lived on the streets of India, where he was fed (and loved) by a kind person in his neighborhood. One day, Goldie was walking along the road when he was suddenly hit by an oncoming car.

Poor Goldie was severely injured in the accident and was unable to move from his place on the side of the road. Goldie's neighborhood friend discovered him after he was hit and immediately called Animal Aid Unlimited, a local rescue organization, for help.

When rescuers arrived to help Goldie, he was in extremely poor condition. The sweet dog seemed stressed and worried after all he'd been through, but as soon as his rescuers got close to him, he seemed to realize exactly why they were there.

"As soon as our rescuer Nandu approached, he started to wag his wail," Claire Abrams-Myers of Animal Aid Unlimited told The Dodo. "It seemed like he knew we were there to help and he trusted us."

Goldie continued to wag his tail and thank his rescuers for coming to help him as they assessed his injuries. They quickly wrapped him up in a blanket and loaded him into their truck to take him to get the help he so desperately needed.

After examining Goldie, it became clear that his injuries were very severe, and would likely take quite a while to heal.

"He was injured in three different places, most severely on his inner thigh and belly where he had dangerously deep lacerations," Abrams-Myers said. "His forehead was scraped and bleeding and his forearm was extremely painful and he couldn't bear any weight on it for many days."

Goldie had lost a lot of blood from his various injuries, and so his rescuers started him on IV fluids to keep him hydrated. They then went about cleaning and bandaging his wounds, and gave him painkillers and anti-inflammatories to prevent any infections. Goldie was so exhausted from his whole ordeal that he could barely lift his head, and after he was bandaged and clean, all he really wanted to do was sleep.

"He was traumatized by the accident and his injuries and was completely exhausted," Abrams-Myers said. "For several days he just slept and we continued the IV drips until he was stronger and started eating and drinking on his own."

It took two full months for Goldie's injuries to heal, but he's now completely healthy again - besides a slight limp in one of his front legs. Goldie is so insanely grateful to his rescuers for saving his life, and can't get enough of cuddling and playing with them.

"He is one of the friendliest street dogs we've ever seen (which tells us that he has been loved by people in his neighborhood)," Abrams-Myers said. "He looks for a pet from everyone he meets and is incredibly cheerful and sweet. He does not want you to give any attention to anyone but him."

Goldie could have died from his injuries if he hadn't been found, but instead he was saved, and can now live a long and happy life being loved and adored by everyone around him.

Watch the full video of Goldie's rescue below: 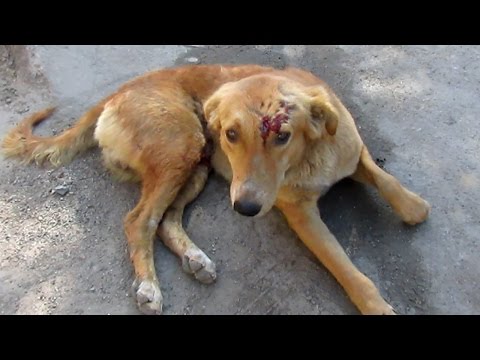