Dog Too Sick To Stand Wags His Tail For Rescuers

Last Friday, a lost dog was dying an anonymous death on a South Carolina road.

Bo's battered body, already half-starved from wandering the streets for weeks, could no longer move after being hit by a car. His owner had long given up hope of finding his runaway dog.

The driver who ran him over didn't stop. Others passed him by.

Michael Rodriguez was on his way home from work when he saw cars ahead slowing down.

"I could tell they were watching something, but I couldn't make out what it was," the 22-year-old tells The Dodo. "Then I saw it was a dog.

Rodriguez pulled over to the side of the road, gently lifted Bo and sped to an emergency veterinary clinic.

Rodriguez became the first link in a chain of compassion that would span scores of volunteers, veterinarians, pilots and organizations.

"My family has always instilled that compassion for animals. If we're not there for them, no one else will be," he says.

At the animal hospital, Rodriguez didn't hesitate to pull out his credit card. Whatever it took to save this dog.

An early estimate for Bo's care was $6,000. He needed an MRI and a neurologist. It was so daunting that Bo's original owner, found later, said he couldn't take the dog back.

At just 2 years old, Bo would be a very costly special-needs dog for the rest of his life.

Then another link in this chain clicked into place. Rodriguez' mother began drumming up support online to help pay for Bo's skyrocketing medical costs.

And then another link: Jackie O'Sullivan of Rescue Dogs Rock NYC heard about the case and wanted to help. But first, Bo would need to be transported to New York City.

O'Sullivan reached out to Paul Steklenski, founder of Flying Fur Animal Rescue - the next link in this chain.

Just a couple of days earlier, Steklenski had flown 22 dogs to a rescue in New Jersey.

"She called on Saturday and I said, 'I don't know if I can do this. I can't necessarily afford it,'" he tells The Dodo.

But ultimately, Steklenski couldn't say no to Bo.

"Once you know that you're the only real missing link, how do you say no to that?" Steklenski says. "You suck it up and do it."

He would make this flight for just one dog.

"I like these guys," he adds, "because they always take the worst of the worst. The dogs no one would even touch."

Indeed, that sentiment seems like a common refrain in Bo's journey.

Steklenski picked up Bo in Richmond, Virginia, and flew him to Morristown, New Jersey.

Bo was so fragile, he had to be moved with the utmost care. A sling was made from blankets to ensure his body didn't twist or bend while he was being taken from the plane.

And finally, a volunteer drove Bo to a Brooklyn animal hospital under the care of Rescue Dogs Rock NYC.

"He's emaciated because he was out on his own for two-and-a-half weeks," O'Sullivan tells The Dodo.

In addition, one of Bo's front paws had lost its padding.

"You can see a wound down to the bone," she says.

He still needs skin grafts on his front leg, as well as an MRI on his spine. One of his legs has completely lost blood flow.

But there's one link in this chain that's already falling into place.

Despite being unable to stand or walk, Bo somehow manages to wag his tail.

The journey ahead will be a long one - adoption is still a far-off prospect, as Bo's medical needs are still being assessed. But Bo is no longer anonymous. He will have all the company in the world on this road.

Much of that thanks to a 22-year-old who decided this dog's journey would not end on a busy road.

"He picked up an unknown, strange adult dog, put the dog in his car and not only drove the dog to the emergency vet but took sole responsibility for him in the hope that people would stand up."

And the amazing thing is, people did. "It was nothing short of a miracle to pull it off," O'Sullivan says.

Want to support Bo on this journey? Consider making a donation to Rescue Dogs Rock NYC to help with its efforts to pay for the spiraling costs of his medical care.

Watch a video of Bo's incredible journey below: 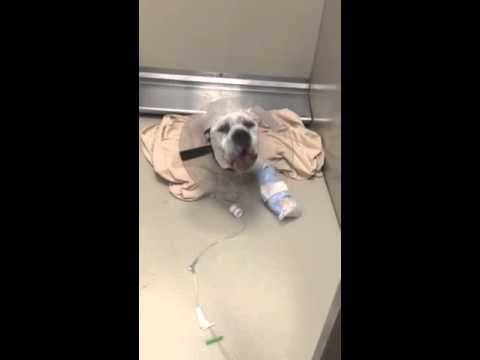