In a video posted on social media this week, a little girl can be seen cuddling a large, surly dog who appears ready to go ballistic.

The dog, on the other hand, seems to have other ideas.

He licks his lips, strains his body away from his misguided fan, bares his teeth and offers a menacingly meaningful growl.

After watching the clip, animal behaviorist Terri Bright, of the Boston-based organization MSPCA-Angell, offered this analysis:

"This dog is showing ethological signs of fear and aggression. You can see the whites of the dog's eye, showing teeth, lip-licking and growling. These are very clear warning signs that are the only way a dog can say 'I am not comfortable right now.'"

"In my opinion, this dog is actually showing a great deal of inhibition, as he easily could have badly bitten this child at any time while she was near his face."

But for some observers, the dog's snarling reaction may not be so clear-cut, especially if the dog is, as he appears to be, a Rottweiler.

"This is actually a Rottweiler trait and I have seen it firsthand in a Rotty we rescued named Gertrude," Zach Skow, founder of Marley's Mutts, told The Dodo. "She would display the very same way when you got close and gave her affection, but it was, for whatever reason, a meaningless posture. The display seemed like a stern warning but was actually just a peculiar Rotty trait."

"It seems aggressive and quite intimidating, but I have yet to ever hear of a story where it was in fact an aggressive behavior," she says.

Polcyn even sent The Dodo a video clip of her cuddling a Rottweiler named Poochie Bear, who appears to be growling happily. 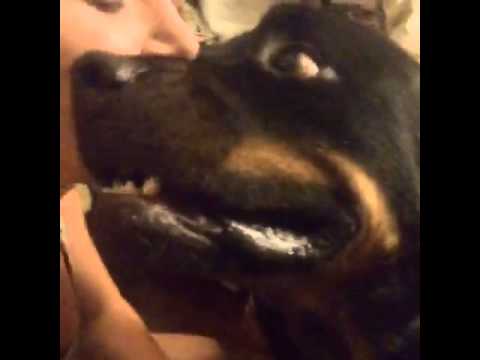 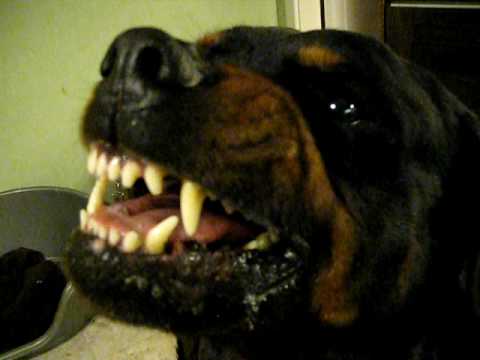 But Jim Crosby, a former police lieutenant who now trains officers in how to interact with dogs, isn't so sure the dog in the Facebook clip is thinking happy thoughts - although he commended the dog's restraint.

"This dog is very uncomfortable, but extremely tolerant," he told The Dodo. "If you look at the body language, he is tense, leaning away from the child from beginning, is looking away as avoidance behavior."

"The increasing level of vocalization and showing of teeth shows that he is extremely stressed, yet is holding back with a huge amount of control. When she releases, he licks - doggie for 'Thanks, please don't do that again!' - and then shows the discomfort as soon as she leans in again."

Sadly, if that's not a "happy growl" and the dog's patience should happen to run out, it won't just be the little girl facing an entirely avoidable injury. Parents frequently have to make the heartbreaking decision to put down their dogs after they bite.

"If, or when, this terrific dog loses it, the child will be the victim and everyone will run around wondering what went wrong," Crosby says.

Jen Deane, who runs the animal welfare group Pit Sisters, told The Dodo the video made her "cringe," but ultimately, this is a lesson in parenting.

"Videos like this should be a lesson in what not to do in allowing a child and a dog to interact," she says.

Especially since the most common victims of dog bites are children.

And it's all the more tragic since situations like the one in this video are so easily avoided.

The American Society for the Prevention of Cruelty to Animals (ASPCA) published a comprehensive list of warning signs that a dog is acting aggressively. Some of them include becoming very still or rigid and lunging.