Dog Confronts Dolphin Who Was Rude To His Human

Dogs have been shown to be especially friendly around dolphins they meet in the wild, almost as if they consider them kindred spirits who just happen to live in the ocean. But as magical as some of their interactions have been in the past, our canine companions do have a line their dolphin buddies dare not cross.

Don't mess with their humans.

A girl swimming off the coast of Galway, Ireland, recently had a rather unpleasant encounter with the region's most disgruntled locals. Dusty the dolphin, as she is sometimes called, has garnered a reputation in recent years for hanging out near popular beaches where she's known to occasionally ram into beachgoers.

Nobody is really sure why Dusty gets aggressive, but swimmers have been warned to keep their distance if they see her approaching. Apparently, this young lady didn't get the message. 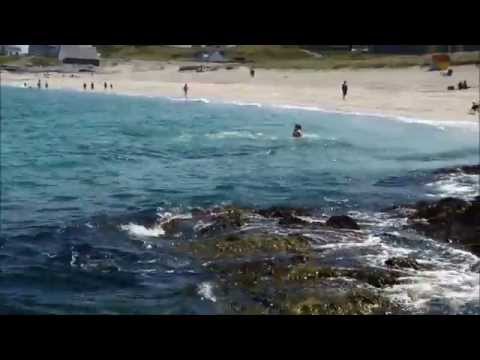 It's unclear from the footage above if the swimmer may have done something to provoke the dolphin, but her pet wasn't about to take any chances. As she scampers away back to the sand frazzled by the rude bump, the fearless dog is seen coming to her defense.

That was enough, apparently, to send Dusty to take her aggressive attitude elsewhere.

Since Dusty, who's also known as Sandy, first began frequenting beaches in the area 14 years ago, she's been implicated in a number of painful rammings on swimmers. Fortunately, folks in the area still consider her to be a beloved character and don't hold the behavior against her.

"It's hard to know what is going through Dusty's mind. Is she protecting herself? Does she feel threatened?" Simon Berrow, from the Irish Whale and Dolphin Water Group, told the Independent. "People do need to be aware that she is a wild animal and unpredictable and to respect that. When you do see the warning signs, do leave the water straight away and no messing as she is wild animal."