Dog Given A Home To Die In ... But He Decides To Live Instead

Animals are so much stronger than we realize - even in the face of death.

In November 2014, a volunteer from an animal rescue organization in Greece saw a Facebook post showing a dog who looked like he came straight out of a horror movie. The dog could barely walk and appeared to be close to death - so the woman, Valia Orfanidou, made it her mission to give the dog a home for his final days.

"The crazy thing about that dog was that his story was, and still is, unbelievable to some," Orfanidou told The Dodo. "When his first photo was posted by a woman who had passed him on a train, there were people claiming it wasn't real, that it was a fake photo taken out of a video game or something like that."

The day after seeing his picture, two other rescuers from Ilioupolis Animal Welfare Union in Athens traveled over 40 miles to save the struggling dog, whom they named Billy. When Billy was first brought to a vet, he was scared to death and severely emaciated, and had trouble walking. Billy also suffered from an extremely contagious kind of mange.

It was unlikely he would survive for very much longer.

"When we took him out of his box, the sight of his suffering body and his absolute terror were so petrifying that we couldn't even cry," Orfanidou wrote beneath a video about Billy's rescue. "We were pretty sure we had taken him off the streets just to offer him the chance of a dignified death."

Though everyone thought the vet would recommend Billy be put down, he didn't. Miraculously, his vitals were stable and, despite his appearance, he was strong enough to begin treatment and an attempt at recovery.

Billy was kept in a small room in Orfanidou's home for his first days after leaving the vet's office. He barely tried to move around and didn't make a sound. "He just laid there in the corner and it was so obvious he just needed to be left alone. So we let him rest," Orfanidou wrote beneath the video.

"He must have been feeling so safe and secure in that small room that he slept for hours and hours. He would eat four times a day and then just go back to sleep," Orfanidou wrote. "I felt like I had a tiny treasure to protect and nurture, and I checked on him a dozen times per day."

As the days progressed, however, something incredible began to happen. Somehow, Billy pulled himself back from the brink of death.

Within 10 days of being rescued, Billy started to regain his strength. He became strong enough to take short walks. Eventually, one thing became very clear: Billy wanted to live. He grew stronger and more trusting every single day and, in just two months, Billy had become a completely different dog.

When Ilioupolis shared Billy's story on social media, many people were so shocked by his transformation, they once again could not believe what they were seeing, claiming the before and after pictures of Billy were of two different dogs. The Billy who survived his horrific condition looked nothing like the scared, skin-and-bones Billy who had been rescued only months earlier.

During his recovery, Orfanidou and Billy had grown very close and she was amazed to see the strong, loving dog he had become. Finally, the day came that both filled and broke everyone's hearts - someone stepped forward to adopt Billy.

A woman named Emma from Switzerland emailed inquiring about Billy, and it was clear from the start she was his perfect match. Though his departure was bittersweet for his rescuers, Billy was ready. It was time to let him go.

"Saying goodbye at the airport was one of the hardest things I've ever had to do. I came back home crying and waiting for his flight to arrive," Orfanidou wrote beneath the video. "It seemed like forever. We Skyped once they were home. I missed him so much already and yet I was so happy to finally see him where he belonged."

Emma and Billy have since come back to visit the people who saved his life, and they are overjoyed to see just how much he is thriving. When they first met Billy, they thought they were giving him a loving home in which to die.

Instead, they gave him the rest of his life.

Check out the full video of Billy's incredible journey below: 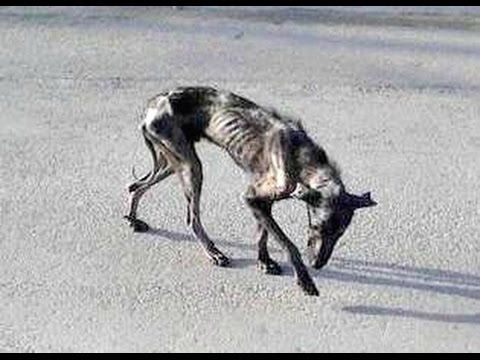