It can happen in a furious flash. One minute, a child can be approaching a dog with gleeful abandon. Dog is cute. Kid must pet dog.

And then, sometimes, the unthinkable happens.

Roughly 4.5 million people in the U.S. are bitten by dogs every year. And in many of those cases, no one saw it coming. But it could've been prevented This clever take on dog bite prevention perfectly illustrates why.

The video, posted to YouTube by Los Angeles-based artists Lili Chin and Eddie Mort, takes us from hello to horror in about 30 seconds.

Along the way, the unfortunate victim - a well-meaning boy - traipses past just about every major warning sign.

For one thing, though you may not know it, kid, you're scary to a dog.

Entering a dog's space and making a beeline for him sets off all kinds of alarm bells, even for the most balanced of pooches.

Naturally, the dog steps backwards and flashes all the telltale signs of discomfort.

He looks the other way.

But the kid just keeps on coming.

And the dog's anxiety mounts. What's this giant got in mind? It can't be good, can it?

It's all fun and cartoons until a dog's survival instinct kicks in. Parents, this is where you can help. Kids naturally want to give dogs all the hugs and kisses in the world - even if some studies suggest dogs are indifferent at best to torrents of mad affection.

A: Children should ask a parent before cozying up to any dog - and the dog's owner.

B: Be a tree (as in, stand still) if the dog is loose or too excited.

C: "Coochie coo," or just plain tickle, the side of the dog's neck.

Don't let this animation's clever style fool you. The tragedy here is twofold. A human is injured, sometimes grievously. And dogs often get the short end of the stick. They can be exiled from their family, banished to a shelter or join the millions of dogs euthanized every year.

And it's almost always entirely avoidable.

Want to learn more about how to avoid being bitten by a dog? The American Veterinary Medical Association publishes a list of crucial guidelines that could save more than just one life. 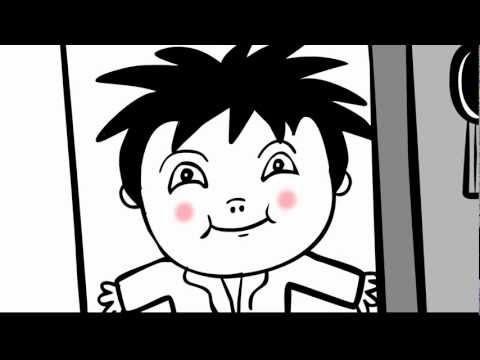