This starving dog, who had all but given up on the world, underwent an amazing transformation. And it's all thanks to a little kindness.

Indian rescue group Animal Aid Unlimited first found the emaciated pup collapsed by the side of the road. At first glance he looked like a pile of rocks, his skinny body curled up in a ball as if he were trying to hide. He was almost completely hairless, covered in mange. His posture was the picture of defeat.

They brought him to their shelter, but it was readily apparent that this little dog had lost all hope. He would do nothing but lay on his little mat in the corner of his cell, curled up in a fetal position as he stared at the wall. His back was a testament to all he had been through, a crisscross of dying skin and open wounds.

"He was so exhausted and inward," the shelter said.

But his rescuers wouldn't give up. Though he wouldn't respond to their touch, they gently tempted him with biscuits until he propped himself up to try one. But the saddest part was that he was so cut off from humans he didn't know what affection was. When a volunteer gently reached toward him and softly stroked his head, he shook it off like a fly, confused by the contact.

But Animal Aid Unlimited knew they could heal him, both inside and out. They hooked him up to an IV for hydration and medicated his damaged skin. Ten days later, his skin was healed, though his eyes were still heavy with sadness. In a video, he stands, slightly cowering, as a volunteer bathes his skin with soothing ointment - though he does seem to enjoy it a bit.

And eventually, their love and care did the trick. Two months later, he was completely unrecognizable. Covered in beautiful white fur, the transformed dog pants happily in the video as a volunteer hugs and pets him.

In another shot, he lays his sleepy head on a new friend's lap as he's petted off to sleep.

It's clear this dog's body is on its way to healing, but the biggest transformation is the one in his eyes: For the first time in months, he has hope.

Each year, Animal Aid Unlimited provides medical treatment to hundreds of street dogs like this one - many of whom would have no one else to care for them. If you'd like to help with their rescue efforts, you can make a donation here.

Watch his full transformation below. 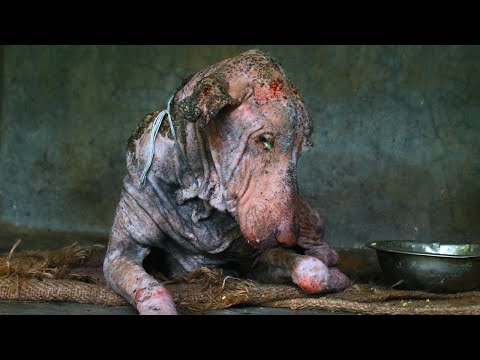