Diver Has Visited The Same Friendly Fish For 25 Years

Beneath the surface of Japan's Tateyama Bay stands a shrine called a torii, sacred to the Shinto religion. But more than being a place of spiritual importance, the underwater site is host to something else that's remarkable - a unique friendship between a man and a fish.

For more than two decades, a local diver named Hiroyuki Arakawa has been entrusted with overseeing the shrine and being a guide to others who wish to visit it. In that time, he's become well-acquainted with the local marine animals who live in the area - including one friendly Asian sheepshead wrasse named Yoriko.

Over the course of 25 years, the pair have forged an incredible bond based on trust and respect.

Perhaps the sweetest testament to their friendship can be seen in Arakawa's custom of greeting Yoriko with a kiss. 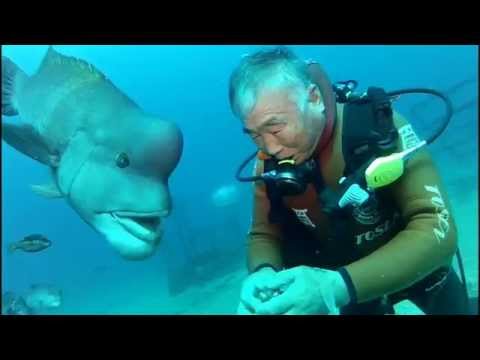 Although fish may not be commonly considered particularly feeling sorts of creatures, that's a notion based more on misconception than reality. In fact, a recent study found that fish are smarter and more social than previously thought - and one only need look at Arakawa and Yoriko's quarter-century-long relationship for proof.