World's Deepest Fish Spotted On Film 26,700 Feet Under The Sea

Marine biologists at Oceanlab have found the world's deepest fish: an "extremely fragile" species of snailfish. At a depth of 26,700 feet below the ocean surface - that's roughly equal to the length of the Las Vegas Strip - the little fish appeared like something out of a Pixar film.

The snailfish swims through a swarm of amphipods, from lower left to upper right. (Oceanlab, University of Aberdeen/YouTube)

With a camera pointed at a baited stick, the biologists sent a remotely operated vehicle to the depths of the Mariana Trench. There, they found giant amphipods, eels and, of course, the tiny snailfish. The discovery offers new insights into the deep sea ecosystem - scientists hadn't known, for example, that fish lived so far below. 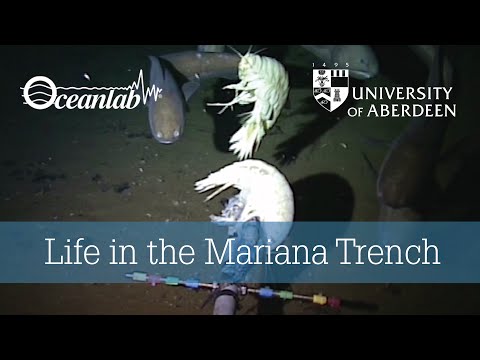 Though the creatures may be far from human civilization, they still feel the effects of humans. "Rarely, do we get a full perspective of the ocean's unique deep environments," stated Schmidt Ocean Institute's Wendy Schmidt. "The questions that the scientists will be able to answer following this cruise will pave the way for a better understanding of the deep sea, which is not exempt from human impact."