She gave him little belly massages to help him get free 💛

Veronica Galindo was at the vet office where she works when she noticed a frog peeking out from a utility hole outside. As she got closer, she realized that the little frog wasn’t just hanging out. He was actually a little stuck.

Galindo opened up the utility door to see if she could try and squeeze him out — and was shocked to discover that he was a lot more stuck than he seemed. The poor frog was actually huge, and his belly was all bloated, which is probably how he’d ended up stuck. Galindo had no idea how she was going to go about getting him unstuck, but she knew she had to try.

“I think [he] hopped on top of the hole and fell in, then became bloated in a panic thinking he was being eaten,” Galindo wrote on TikTok. 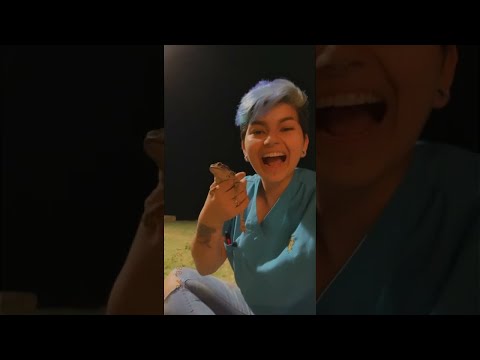 Determined to help him get free, Galindo sat with the frog for a while, massaging his belly, trying to get him into a less bloated state. After a while, the swelling began to go down, and it seemed they were getting closer and closer to being able to wiggle him free.

The frog was able to spin himself sideways and kept moving his legs, doing his best to get himself out. Galindo let him use her hands to push off of, really trying to work together as a team to figure it out. Pinto, one of the vet dogs, tried to help too but definitely wasn’t as helpful.

Finally, after lots of maneuvering, the not-so-little frog was finally free. Galindo held him and made sure he was OK before releasing him into the grass. She and Pinto said their goodbyes, and as she wished him well, she sincerely hoped he would never go near any kind of hole ever again.