Shelter Dog With Special Face Just Wants Someone To Love Him

"He was just born that beautiful.”

With Aardvark, what you see is what you get: a goofy, adorable pup who’s as beautiful inside as he is out.

In January, Aardvark was found as a stray by a Good Samaritan on the streets of Baltimore City and brought into the Maryland SPCA (MDSPCA). The shelter staff couldn’t believe what they saw — a 50-pound dog with a face out of a cartoon and paws like flippers.

“Honestly, nobody could take him seriously,” Brittany Roger, a digital specialist for the MDSPCA, told The Dodo. “His face and his personality inspired a lot of giggles.”

An exam with the shelter’s vets revealed that Aardvark was still a puppy, at only 8 months old, and that his small lower jaw had been with him from birth. “Most people assume that he’s been through some kind of accident,” Roger said. “But they’re quickly relieved to find out that he was just born that beautiful.”

Aardvark’s facial deformity never seems to bother him or get in the way of him being a very good boy. “Not only does he eat well, but he also likes to chew on things — though not destructively,” Roger said. “He’s happy and healthy, which makes his goofiness even more endearing.” 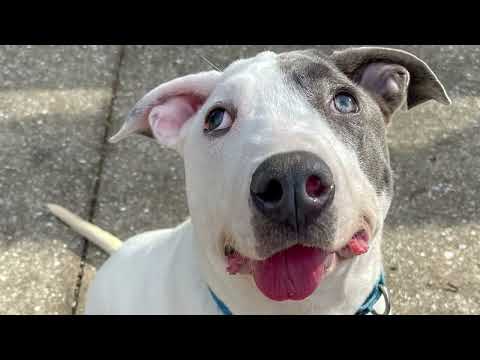 The only thing better than Aardvark’s sweet face is his easygoing personality. The unique pup just seems grateful to be around people who care for him and enjoy his company.

“He’s an energetic, happy, social little dude,” Roger said. “We have so much fun dressing him up and taking him places because nothing really bothers him.”

Unfortunately, finding a forever home hasn’t been simple for Aardvark. Though the shelter describes him as a “one-size-fits-all” dog who’s “so chummy that [he] could make friends with a brick wall,” potential adopters keep letting him down.

“He has gotten a few applications and for one reason or another they keep falling through,” Roger said. “It’s not his fault, but he’s struck out with bad luck.”

Hopefully, Aardvark will find a winner soon and be able to give all his love to someone who appreciates him for the one-of-a-kind dog he is.

If you are interested in adopting Aardvark, you can fill out an application here.