Rescued Baby Elephant Has The Most Adorable First Bath

“Chaba is a true water baby!”

When a baby elephant named Chaba first set foot in a little plastic tub filled with fresh water, it was unlike anything she’d experienced before.

Chaba was born in a small concrete pen at an elephant riding camp in Chiang Mai, Thailand. Her mother, BunMa, was forced to do daily shows — riding a bike, painting pictures and performing circus tricks to entertain tourists.

This would have been Chaba’s fate, too, if rescuers from Save Elephant Foundation hadn’t intervened.

“When our team learned about the plight of Chaba and her mother, BunMa, we went to the camp to see how we could help them,” Ry Emmerson, projects director at Save Elephant Foundation, told The Dodo. “We found the mother and baby in a small concrete pen, barren of any enrichment, and the mother on a short chain. It was immediately clear that they were both in poor health and needed urgent intervention.”

The founder of Save Elephant Foundation negotiated the family’s release and rescued them in August. The rescuers had planned to transport them by truck to Elephant Nature Park (ENP), but BunMa was frightened that she’d be separated from her baby and refused to get into the vehicle.

“We decided it was safer for them to walk to our sanctuary,” Emmerson said. “After two hours of walking, they arrived at ENP and were welcomed with an elephant cake.” 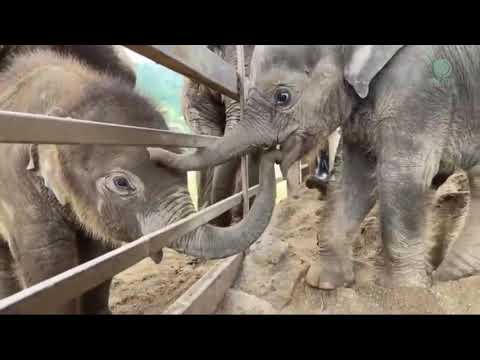 After devouring her cake, Chaba was given her first bath. Everyone was surprised by the look of pure delight on the then 4-month-old elephant’s face.

“Chaba is a true water baby!” Emmerson said. “She loved splashing around in the water and then running back to Mum for reassurance. Now, she loves to play in the splash pool with her basketball whilst her mum enjoys some tasty fruit treats.”

Chaba and her mom are now enjoying a life of freedom, socializing with other elephants, foraging for food and rolling around in mud puddles.

But there’s nothing Chaba loves more than her little pool.

“She loves playing with the water and splashing around,” Save Elephant Foundation wrote on Facebook. “Mom walks away while she is playing and gets a moment to relax. She is growing confident and learning so much.”