“He always gravitates towards my hair.”

Cheyanne Brubaker adopted Gazpacho after his family could no longer care for him the way he needed. While it took him a minute to warm up to his new life, after about two weeks, his true personality began to shine through.

“He is very friendly and docile,” Brubaker told The Dodo. “He loves to climb and explore.”

One day, Gazpacho was doing his regular exploring when he decided to mix things up. He slithered up to Brubaker — and wrapped himself around her hair like a hair tie. She definitely wasn’t expecting it but was absolutely thrilled that Gazpacho felt safe enough to snuggle up to her like that.

“It was definitely a lovely surprise,” Brubaker said. “I was so glad he feels comfortable enough with me now to climb me!”

Gazpacho has the freedom to go wherever he wants when he's cuddling with his mom, but for some reason, he always chooses the exact same spot.

"He always gravitates towards my hair," Brubaker said in a video about Gazpacho.

Now, every time Brubaker picks up Gazpacho, he wraps himself around her hair. It’s his favorite hang-out spot, and Brubaker wouldn’t have it any other way.

Brubaker shared Gazpacho’s adorable new habit online in the hopes of showing people that snakes don’t have to be scary. They can be so sweet and lovely, and it’s possible that Gazpacho pretending to be a hair tie may have inspired some people to rescue a snake of their own.

“I was surprised because I figured most people would be scared of the video due to many fears of snakes, but an overwhelming majority found him adorable,” Brubaker said. “Some people even considered possibly rescuing a snake of their own (with proper research, of course). I think it really helped combat the stigma of all snakes being dangerous and aggressive.” 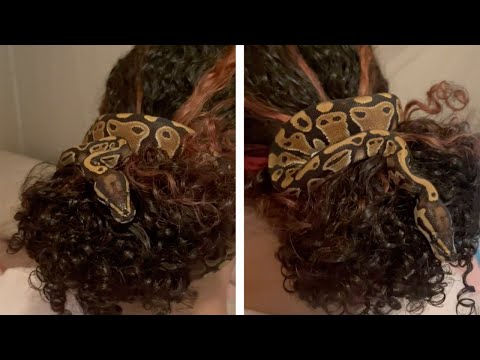 Even though Gazpacho’s first home didn’t work out, he’s so happy being a part of his new family, and Brubaker can’t wait to see what kinds of adventures he’ll get into next.