People Are Freaking Out Over The Elephant Hidden In This Rock

Can you see it?

In Iceland’s Westman Islands, the head of an enormous elephant dips his trunk in the cold Atlantic waters for a drink.

It’s hard to believe that the elephant peeking out of this 700-foot-tall sea cliff is entirely natural. The eyes, trunk and ears seem too perfectly defined. Even the basalt rock’s texture looks like an elephant’s wrinkled gray skin.

But this mystical sea elephant is no Photoshop trick.

Elephant Rock lies about 4 and a half miles off the south coast of Iceland, in an area known for rocks and islands formed by centuries of volcanic eruptions. Located at the split between two continental plates, volcanic activity is frequent below sea level as the land moves apart.

You can find the elephant’s face on the western part of Heimaey, the largest and only inhabited island in the area.

It’s believed that Elephant Rock is relatively young, formed when Mount Eldfell, a volcanic cone in the center of the island, erupted without warning in 1973. 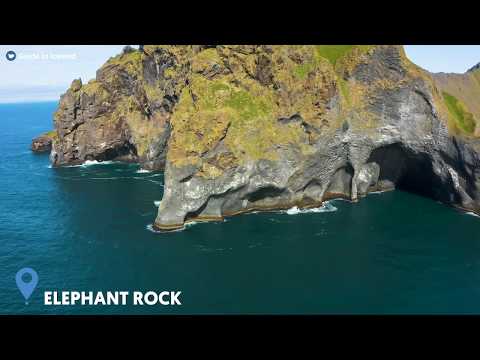 Not only does Elephant Rock resemble the large animal, but the area is known for its wonderful bird and whale watching and is home to the largest group of nesting Atlantic puffins in the world during the summer.

Iceland’s Elephant Rock isn’t the only stone formation resembling the large animal — you can also find an elephant rock by the side of a highway in Sardinia, another elephant dipping his trunk into the water in New Taipei, Taiwan, and a large elephant-shaped rock rising out of the desert in Saudi Arabia.

But none can match the perfection of Iceland’s natural wonder, which literally stands head and shoulders above the rest.

The Best Gifts For Adventurous Cats (And Their Parents)

The Best Gifts For Adventurous Cats (And Their Parents)