Wild Bird Learns How To Clean Up Trash From The Neighborhood

For 20 years, a pair of magpies have lived in Hans Forsberg’s yard.

The birds usually keep to themselves, but when Forsberg observed the curious magpies opening the complicated locks on his outdoor lanterns, he got an idea.

“The magpies were looking for the paraffin candles that were in the lanterns,” Forsberg told The Dodo. “My curiosity was aroused … Could I challenge the magpies to solve missions?”

Forsberg, an artificial intelligence researcher with specialties in robotics and computers, wondered if he could build a machine that would train the birds to pick up litter from his garden in exchange for food.

“Finally, [I had] a hobby project where I got to start from scratch,” Forsberg said. “There were no how-tos to Google here — it was entirely up to me!”

He created a workbench for the birds to land on, with a slot for the magpies to recycle metal scraps and bottle caps and a treat dispenser that would kick out food in exchange for the trash. At first, the adult magpies were wary of the new contraption in their yard and avoided it.

“They are quite neurotic so I had to have patience — the slightest change in the rig or equipment, and the adults would be suspicious for a day or so,” Forsberg said. “These have been the birds I have worked with for a few years.”

But everything changed when the pair built a nest in a cherry tree next to the machine and four little chicks hatched in the spring. “These chicks started to investigate the machine after the adult parents were gone,” Forsberg said. “The chicks are braver — almost stupid like teenagers. One walked straight into our kitchen.” 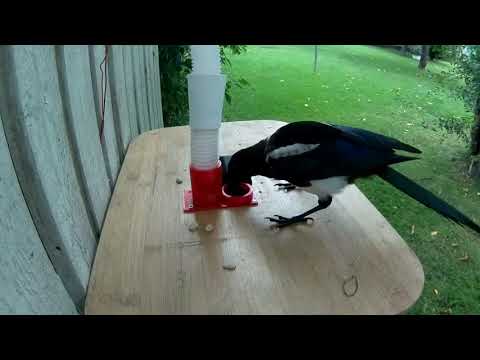 Eventually, one of the chicks figured out how to exchange bottle caps for food, and the little magpie has been doing his best to clean up the neighborhood ever since. His siblings, however, are more interested in stealing the rewards than picking up litter themselves. 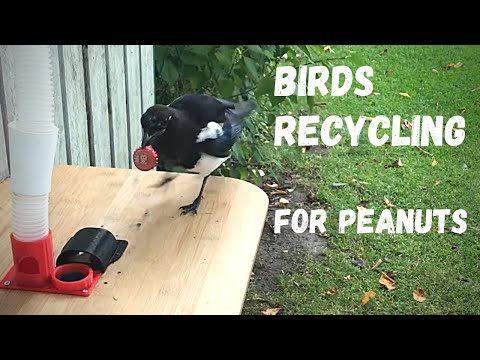 Forsberg hopes to use his magpie friends to help with more pesky chores in the future — including picking up fallen fruit, cigarette butts and other things from his lawn and the neighborhood.

This will require building another machine and retraining the magpies. But he and his bird friends are ready for the challenge.