Every April, a devoted pair of kestrel falcons return to the same old tree to lay their eggs on Robert Fuller’s property in Thixendale, North Yorkshire.

But raising their young isn’t as simple as it seems — even with two caring parents. With nest sites in high demand, the kestrels must protect their eggs from jealous barn owls and jackdaws.

Fuller has a front-row seat to the kestrels’ battles, thanks to a secret camera hidden in a hole in the tree.

“I often have my heart in my mouth,” Fuller told The Dodo. “It is distressing to see an animal you have been following being attacked, but their bravery and courage shine through.”

This year, the mama kestrel laid a large clutch of six eggs — something especially exciting as the kestrel population is in decline across the UK. But with numerous threats to the nest, it seemed like the eggs wouldn’t make it.

Last year, the mama kestrel lost one of her eggs to a hungry jackdaw, and she refused to let that happen again.

Over the month of egg incubation, Fuller watched as a group of jackdaws constantly tried to raid the nest. But the fierce mama kestrel refused to let them near her babies. She and her mate continuously chased them away, and just when Fuller thought the jackdaws had given up, he awoke to some shocking footage.

“The female kestrel is gripping tightly to a jackdaw. My cameras haven’t recorded overnight due to a power cut, but I can only assume they had a dramatic battle inside the nest,” Fuller said in a video. “Both birds are obviously exhausted from the fight, breathing heavily, and the kestrel’s face is covered in blood.”

When the stalemate ended, both birds scrambled for the eggs, but the female kestrel managed to chase off the jackdaw before any harm was done.

You can watch the fight here: 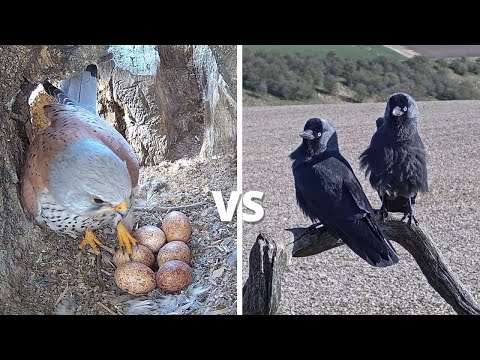 The fight left the eggs scattered around the nest, so Fuller decided to step in. He gathered up the eggs into a neat pile so the mama kestrel could warm them all. Two of the eggs felt cold, and Fuller worried that they might not make it.

“Generally, you have to leave most things to nature,” Fuller said. “With endangered animals such as kestrels and barn owls, there is a definite conservation reason to intervene.”

A few weeks later, all six of the eggs hatched, and the kestrel parents couldn't be prouder.

Soon, the chicks will learn to fly and catch their own food — and it will be all thanks to their mother’s strength and bravery, and a little helping hand from a neighbor.

To watch the chicks grow and learn about the other wildlife on Fuller's property, you can follow Robert Fuller on Facebook and YouTube. You can watch a livestream of the kestrels and their chicks here.

Top-Rated Dog Pools To Spoil Your Pup This Summer

Top-Rated Dog Pools To Spoil Your Pup This Summer