When the pandemic first began last year, Cara Dunn’s parents decided to start taking an interest in all of the wildlife in their backyard as a new way to pass the time. They love watching the birds, squirrels, deer, turkeys and other animals who pass through, and it’s become one of their favorite things to do together.

Dunn’s dad put out a bird feeder for all of the birds in their yard, but then quickly realized that the squirrels were eating from it too. In order to solve the problem, he knew he needed to get a little crafty.

“He originally had the bird feeder on a pole in the middle of the yard, but the squirrels would climb up and eat it all, leaving him with some angry birds,” Dunn told The Dodo. “So he decided to get innovative and spent 30 minutes getting a rope around the tallest part of the tree, where he thought the squirrels wouldn’t be able to reach any longer. He was satisfied, thinking he outsmarted them for once!” 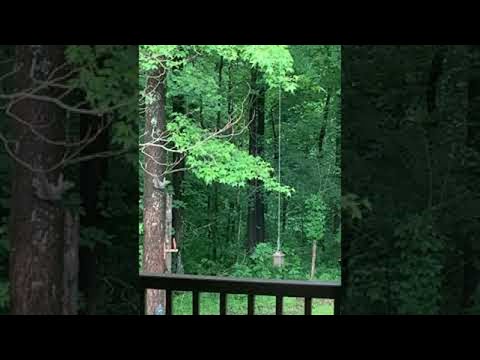 Dunn’s dad was convinced that he’d solved the problem — but the squirrels had other plans.

Instead of just giving up, the squirrels started leaping from the tree onto the feeder, and Dunn’s dad couldn’t believe his eyes. Apparently, the squirrels really wanted that food and would do anything to get to it.

“Shortly after, he began noticing that squirrels were still jumping on the feeder that was quite a ways from the tree,” Dunn said. “He kept waiting to see if he could get it on camera because we didn’t believe him, and he finally did! He sent it to our family, and we laughed so hard.”

Unfortunately, the plan to get the squirrels to stop eating the bird food didn’t work at all — but if they’re willing to leap across extraordinary distances just to get to the food, then honestly, they’ve probably earned it. Well done, squirrels.