Max was never trained to be a hero, but when the moment called for it, the Staffordshire terrier/bulldog mix answered the call.

Before Jamie and Rob Osborn adopted Max, he was a neglected pup. He lived mostly outside and was never taken out for walks. But the love of his new parents quickly changed the wary dog.

“When we got him, he was a bit antisocial,” Jamie Osborn told The Dodo. “If we were patting him too much, he'd get up and walk away. These days, Max is a completely different dog. He's always happy! He's really loving and gives us lots of love and affection.”

Max now lives inside as part of the family in Port Noarlunga, Australia. He loves sleeping in bed with his 11-year-old brother, Nev, and — most of all — splashing around in the water.

In the summer, Max spends most of his time at the beach with his family. “We have kayaks and he likes to swim along with us as we paddle, so we got him a life jacket so he wouldn’t get too worn out,” Osborn said. “Rob likes to surf and snorkel, so Max can often be seen at the beach hanging with the surfers waiting for a wave.”

In January, Max was enjoying a quiet day at the beach with his dad and brother when something went wrong. A young boy got caught in the current and started to panic. Instead of swimming parallel to the shore to escape the current, he tried to swim against the current and quickly got stuck. Rob spotted the boy and called out to Max for help.

“Max was just swimming around, wearing his life jacket, having a great time when the young boy got into trouble,” Osborn said. “Rob had the boy call Max over. Max was just doing what he loves best — swimming.”

Max obediently swam over to the struggling boy and let him grab ahold of his life jacket. The pup fought the current and towed him back to the safety of the beach. 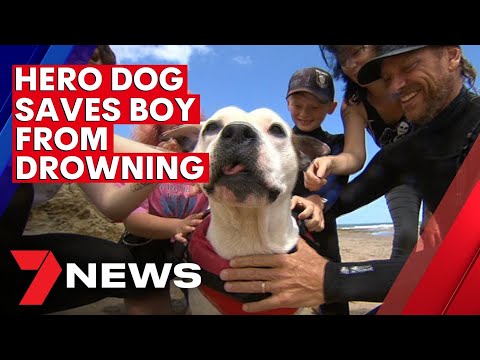 Later, Max acted as lifeguard yet again. “One of Nev’s friends also found it a bit tough, so he went back and got her, too,” Osborn wrote on Facebook.

Max was declared a hero — but he doesn’t know it. All he knows is that he’s getting a lot more pets and treats, and is happier than ever.

This Is The Best Gear For Big Dogs

This Is The Best Gear For Big Dogs