This Boy's Reunion With His Dog Will Totally Make Your Day

They never thought they'd see each other again ❤️

Earlier this month, a 10-year-old boy named Tyler Bandy got the best present he could ask for. As he walked in the door, he was immediately overwhelmed by love and kisses from an old friend — his dog, Bruiser.

In January, Bruiser, a gray and white pit bull, was on a walk when he ran after a rabbit and got lost.

The Bandy family did everything they could to try and locate Bruiser. They posted fliers around their Florida neighborhood, posted on Facebook, put out old clothes in front of their home so he could smell them and repeatedly checked their local animal control.

But as the weeks passed and no leads were found, the family was “starting to lose hope,” according to Tyler’s mom, Jamie Bandy.

“That’s when the phone rang,” the Highlands County Sheriff's Office wrote on Facebook. “Turns out their dog had been picked up by somebody on their way to Highlands County and, after a couple of months, it wound up in the hands of our animal services folks.”

A staff member at animal services thought the pup looked familiar and, after some digging on social media, she found out why. Bruiser was returned to his parents, but they kept his arrival secret so that they could surprise Tyler.

“To say Bruiser had a joyous homecoming would be putting it lightly,” the Highlands County Sheriff's Office said.

You can watch the emotional reunion here: 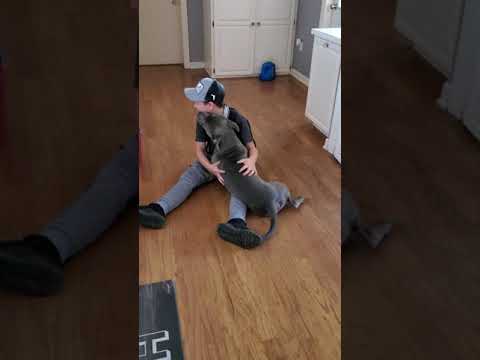 Tyler was shocked when he came home and saw Bruiser, and both were overjoyed. Tyler immediately started sobbing and hugging his best friend, while Bruiser showered him with licks, wagging his tail as hard as possible.

“[Tyler] was simply overcome when his parents surprised him with his best friend,” the Highlands County Sheriff's Office said. “The two have been inseparable since.”

Picks To Keep Your Pet From Getting Lost

Picks To Keep Your Pet From Getting Lost