Zoo Takes Baby Tigers From Their Moms To Swim With Tourists

"My tigers are so well known because so many people touched them."

A tiger cub is shown being tugged by a leash along the surface of a tub of water, an undercover video released in October shows.

"The USDA's allegations include forcing a baby tiger to swim despite his repeated cries and attempts to escape the pool. And the video proves that," Brittany Peet, director of Captive Animal Law Enforcement at the PETA Foundation, which released the footage, told The Dodo.

"Ariel, the tiger in the pool in this video, had an apparent spinal deformity and was made to swim for more than 10 minutes despite not being able to hold her head up," Peet said. PETA had veterinarians examine that footage, and found that she risked aspirational pneumonia by having her head go underwater. "She was clearly distressed," Peet added.

Big cat experts have widely condemned the handling of cubs for entertainment, and have criticized DCWT in particular.

"It is heartbreaking to see this notorious roadside zoo continue to breed and exploit tiger and lion cubs year after year just to make money," Susan Bass, director of public relations for Big Cat Rescue, told The Dodo. Susan Bass has been to DCWT twice, in 2012 and 2014. "The first time I went ... I couldn't even sleep that night when I got home, I was so concerned about what I'd seen," Bass said.

But Stearns, who runs DCWT with her son, Randall, told The Dodo that the footage isn't what it looks like.

"The entire video is misrepresented and cropped," Stearns said. Stearns had her lawyers issue a cease and desist order to PETA. 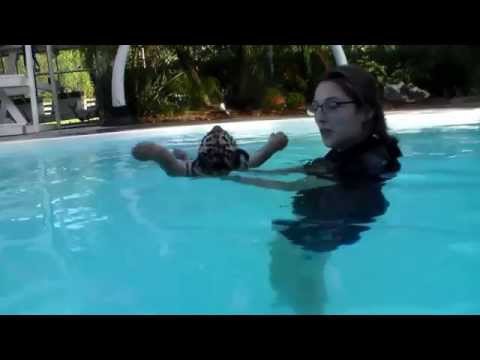 As for the cub being pulled through the water in the video? "That one's an easy one," Stearns said. "That's a special-needs cub in the tub. A veterinarian was doing water therapy and acupuncture for him. What you're seeing is actually the first time that they're introduced to the water."

According to Peet, Stearns uses the video of Ariel swimming to solicit donations, and used photos of a different tiger in marketing materials claiming to show Ariel's improvement.

"Dade City's Wild Things pulls tigers from their mothers days after their birth for photo-ops," Peet said. "The video speaks for itself. It reflects the day-to-day conditions of these animals."

"When you have 300 animals, there are going to be some minor violations."

It may be true that the special-needs tiger has grown up to be healthy. But it has historically been hard to keep track of the exotic animals DCWT has.

"Respondent has not shown good faith," the USDA reported in 2015, citing numerous events that were in violation of the Animal Welfare Act, in numerous ways pertaining to insufficient veterinary care and facilities, as well as how workers were observed handling a tiger. "Despite having received multiple inspection reports identifying noncompliance with the Regulations and failures to comply with the Standards, and the receipt of an Official Warning, respondent has continued to mishandle animals, particularly infant and juvenile tigers, exposing these animals and the public to injury, disease and harm."

"When you have 300 animals, there are going to be some minor violations," Stearns told The Dodo. She says the USDA's allegations against her are largely bogus. (It's unclear whether Stearns is exaggerating about this number, which is more than double the 139 animals reported to the USDA last year, but the number has been reported before.) "I took it to trial. I didn't want to spend $1,500 on violations I didn't do, so I spent $30,000 trying to defend myself."

The results of the suit are still pending.

"It's all fabricated," Stearns insisted, about the claims against her private zoo. "It's a totally different story." 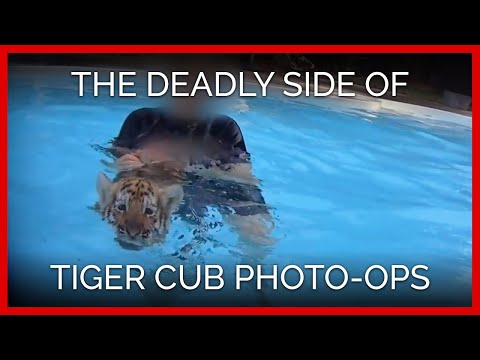 But Bass described her experience this way: "The tigers who had been used for petting were being kept in cages with cement floors ... Several of the enclosures stunk so bad I had to hold my breath."

The second time Bass went to DCWT, the swimming-with-cubs exhibit had opened. "It was January or February and even though it's Florida, it can get pretty cold," Bass said. "There were a couple of people who got in the pool with the tiger cub. They were wearing wetsuits. When the cub got out of the water, it was just shivering. No one cared."

In a nearby cage was Leo, a lion cub she had seen the first time she visited DCWT, posing for photos. "Leo was now 2 or 3 years old and they had him in a caged space," Bass said. "It was heartbreaking to see that this cub who had been used for the petting was still there in this little cage."

"I want the education part," Stearns said. "I want people to see these animals."

Increasing the captive tiger population is Stearn's goal because, she says, it will help keep them from going extinct.

"There's only a handful of us in the U.S. doing that," Stearns said. "I alternate my breeding stocks because I don't want to keep producing the same bloodline." She says she participates in a genome project that tracks the genetic material of captive tigers.

"Dade City's Wild Things is proud to partner with Dr. Brian Davis and Dr. Jan Janecka, founders of the American Captive Exotic Feline Repository," the website reads. "Dade City's Wild Things has provided tissue and genetic samples and data from many of [their] animals that reside here at the [zoo] to help preserve these species in the future. For more information, including how other big cat facilities can participate, please visit acefr.org." The web page doesn't exist, and Dr. Janecka and The Exotic Genome Repository (which appears to be linked to this project) did not immediately reply to The Dodo's request for comment on Stearn's handling of tiger cubs.

According to Bass, DCWT used to list a number of conservation partners on its website. Bass told The Dodo that she called some of the institutions, like the University of Arizona, to see why they partnered with DCWT. "They had never heard of Dade City's Wild Things," Bass said.

But Stearns has a network of other kinds of partners. "I give tigers to give other sanctuaries that aren't accredited," Stearns said. "They need a tiger, and I have them ... I just have a different philosophy."

Despite her purported aims at education, some visitors left dissatisfied.

"My girlfriend spent a S*^% ton of money to take me here to swim with a baby tiger for my birthday," one reviewer on Yelp said. "We pull up to this small dilapidated trailer home/gift shop to check in. This woman immediately tries to sell us on more animal add-ons ... we were told absolutely NO CAMERAS NO PHOTOGRAPHY ... We are the only two on the tour which is cool. We see some animals. And are a little sad because a lot of their cages seem a bit small. The cats are pacing back and forth and have no area to roam, run or jump."

The tiger encounter "was nothing but photo ops. 'Ok you sit here. Tiger sit here.' *snaps photo* 'next.' So on and so forth. We got into the pool and we swam side by side with the baby tiger while they snapped photos. This wasn't an encounter. It was merely $250 just for photos with a baby tiger in a swimming pool ... Please do not give your money to these scam artists. I feel bad for these animals."

"We were told multiple times from the start no photos or videos were to be taken," another visitor wrote on Facebook. "These photos don't depict even an ounce of how bad living conditions are here. Huge (multiple) exotic 500lb tigers living on concrete slabs the size of a master bedroom, large parrots with zero feathers on their bodies with beaks so overgrown it reaches their chest, (makes them unable to eat/crack food) coyotes living on concrete in a dog kennel I wouldn't put my dog in. The coyote was spinning in constant circles similar to shelter animals deprived of proper space/stimulation. He'd for sure gone crazy."

Where the tiger cubs go when they grow up

DCWT has had "four or five" tiger cubs born this year, Stearns said, and she has sold "six or eight" adult tigers to roadside zoos this year.

Stearns recently drove two female tigers to a zoo in Billings, Montana, where, she said, zookeepers were "shocked at how well-adjusted" the animals were. Stearns admitted that accredited sanctuaries are overrun with animals they don't have room for. When asked why she's breeding more tigers when the system is already so stressed, she said that being an unaccredited private zoo lets her do what she thinks is best for the animals.

"We go and visit facilities to approve and then we go deliver them," Stearns said. "But the breeding of tigers is not the moneymaker. Running this place like a zoo is the moneymaker and working seven days a week."

Regardless of the conditions the cubs are kept in, the simple act of touching a cub can be harmful. "The abuse begins when the cubs are prematurely and forcibly separated from their adult mothers - usually during or immediately after birth - depriving them of normal biological and behavioral development," Lisa Wathne, captive wildlife specialist at the Humane Society of the United States, told The Dodo about tiger cub attractions last year. "Rather than experiencing the warmth of their mother and interacting with their siblings, the cubs' lives are dictated by the demands of the paying public." Handling also means that the cubs' feeding and sleep cycles are disrupted.

"The Big Cat Public Safety Act, a federal bill which is currently pending in Congress, will effectively ban the public from having direct contact with cubs," Bass said. "Once the monetary incentive to breed tiger cubs is gone, most of the abuse will end."

But Stearns sees no problems with what she's doing. The DCWT tigers are "more trackable" than the other 5,000-some tigers in captivity in the U.S. because Stearns has them "more out in the open," she said. "My tigers are so well known because so many people touched them."

A petition urging DCWT to stop having tiger cubs swim with tourists has gathered over 367,000 signatures.

To learn how you can contact Congress to show your support for the Big Cat Public Safety Act, click here.

To help tigers and lions rescued from situations like these, you can make a donation.

Click here to learn how to tell whether an animal sanctuary is the real thing.