"We thought the siblings would stay bonded with each other, but they all flip-flop. They all care about each other just as much."

The capture of Storm and Snow might best be described as a tale of two kitties.

The cougar siblings, just a few months old, had lost their mother and desperately needed a human hand. Locals had spotted them a few times in northern Washington state, but the kittens had proven elusive.

"They had no idea that everyone was trying to help them," Tammy Thies, founder of The Wildcat Sanctuary, tells The Dodo.

But when these hungry orphans came across a meal, they gorged long enough for state wildlife officers to zero in on them.

But his sister, Snow, had other ideas.

A dog chased her up a tree. Once up there, she was tagged with a tranquilizer dart. But Snow still had plenty of jump. She leapt to the ground, and scampered into the brush. Tracking dogs eventually caught her scent. And, finally, a soaking-wet Snow was found near a river.

The tranquilizer was finally starting to set in. It prevented Snow from regulating her own body temperature. An officer had to use the heater from his truck to keep her warm.

About 48 hours later, the brother and sister were at The Wildcat Sanctuary, a sprawling Minnesota refuge for big cats of every stripe.

Because they never had a chance to learn how to hunt from their mother, these cougars would spend the rest of their days there.

"We really want them to grow up wild," Thies says, "but if that can't happen, we like to give them the next best thing, which is growing up wild at heart in an open-space enclosure."

Just each other. Or so it seemed for the first few months.

Not long after their arrival, a couple more orphaned cougars, named Blaze and Aspen, were found. And it didn't take long for these two sets of siblings from shattered families to piece together their own family unit.

"It's funny because we thought the siblings would stay bonded with each other, but they all flip-flop. They all care about each other just as much," Thies says. "They nap together. They curl up in winter together. We're happy that they have each other."

The goal is to move all of these cougars into a free-ranging habitat at the sanctuary this fall. At 15,000 square feet, it's certainly a step up from most enclosures.

"They'll get to live life in northern Minnesota with pine trees and tall grass and plenty of hiding spots," Thies says.

The ideal place, it would seem, for a family forged from trauma to find a lifetime's worth of peace.

If you would like to support The Wildcat Sanctuary and its mission to save countless animals like Snow and Storm, consider making a donation here.

Watch a video of Storm and Snow below. 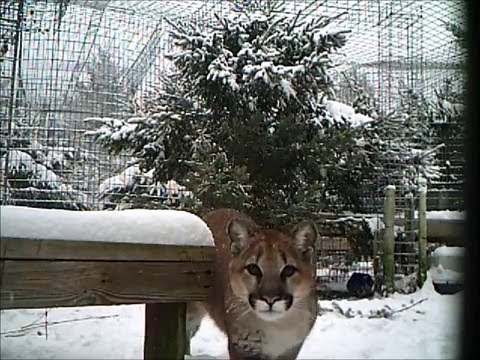