Complaint Alleges That Seaquarium Is Putting Its Orca Trainers In Danger

On Tuesday, a video on YouTube showed the Miami Seaquarium with wetsuited trainers riding on top of an orca named Lolita and jumping into the tank with her. The video was timestamped "May 10, 2014" which is odd since OSHA has restricted SeaWorld from letting trainers ride the animals or be in the water. 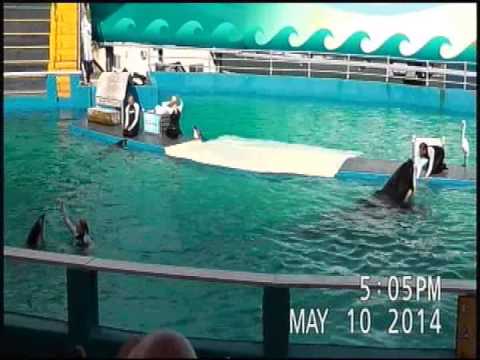 As it turns out, the footage was captured by an inspector from the Animal Legal Defence Fund (ALDF), who was sent to confirm that this behavior is still done by trainers. The video was taken as a way to justify a complaint filed by ALDF today to the Occupational Safety and Health Administration (OSHA). The complaint contends that Miami Seaquarium should be held to the same standard as SeaWorld, and that trainers should not be allowed to directly interact with the whales.

The complicated story starts back with the 2010 death of SeaWorld trainer Dawn Brancheau, the focus of the CNN documentary "Blackfish." OSHA fined SeaWorld of Florida after finding they violated OSHA's "general duty clause," which requires that employers furnish employees a place of employment that is free from recognized hazards that are causing or are likely to cause death or serious physical harm. Trainers were banned from entering the water with orcas as a result.

MSQ [Miami Seaquarium] is a marine entertainment facility that continues to require trainers to swim with, ride on top of, and otherwise interact in close physical proximity with an unpredictable and inherently dangerous orca named Lolita. In doing so, MSQ exposes its employees to a deadly recognized hazard that is easily abated.

This isn't the first time the Miami Seaquarium has made headlines for its captive orca -- in January, the National Marine Fisheries Service (NMFS) proposed a rule on Friday to grant Lolita protection as an endangered species -- a ruling that would allow for her to be retired from performing and transferred to a seaside sanctuary. She was captured at two years old and has spent 40 years in captivity, and has been called "the orca the law forgot." Read more about Lolita's story here.

We've reached out to Miami Seaquarium for a comment and will update this post when we hear back.