Homeless Kitten Decides He Wants To Be A Surfer

He has fans all over 👏

Pip the Beach Cat was a tiny, sickly kitten looking to trade in his feral family for the comforts of a human home when he showed up on a doorstep in Berlin, Maryland, in September 2018. He arrived just after a thunderstorm, perhaps foreshadowing his fearlessness when it comes to water — something cats are famous for disliking.

In Berlin, Pip had found a grandmother who was house-sitting for her family, and she began feeding the tiny kitten. Unfortunately, her family could not take him in when they returned and the elderly woman was moving, so Laura Meadows — a high school student and friend of the family — volunteered to take him despite the fact she had not discussed it with her family. When Meadows’ family declined to let her keep Pip, Laura’s older sister Emily Meadows and her husband offered to take him for a while.

“My sister begged me to take him and we were just watching him, assuming we would take him to the humane society,” Emily Meadows told The Dodo. “But then the humane society was full and we had to keep him, so that’s how it all started.”

It wasn’t long before Meadows saw just how unique and special Pip was, but her first task was to get him healthy. His eyes were nearly swollen shut and he was described as “very, very dirty.” He was even thought to be deaf because he never looked at Meadows or her husband when they made noises or called his name. A good ear cleaning at the vet proved that to be untrue and now he hears everything, according to Meadows.

Once Pip was feeling healthy, he turned out to be quite the energetic little troublemaker. He spent his days climbing window screens, knocking over water glasses and anything else that wasn’t nailed down, scattering food all over the floor and terrorizing his new cat siblings Natty and Mowgli. He especially enjoyed waking them up by jumping on their heads.

“It was Pip’s world,” Meadows said. “We were just living in it.”

Pip’s preference to use houseplants as his litter box had Meadows and her husband at their wits’ end, so they decided to try something unconventional. “The house needed a break,” Meadows said. “Natty and Mowgli definitely needed a break. And that’s when the idea came to us: Why not take Pip outside for a walk?”

Meadows and her husband live in Ocean City, Maryland, so they decided to put Pip on a leash and take him out to the beach to see if getting back to his outdoor roots would help disperse some of his energy. As it turned out, Pip was a big fan!

Pip quickly showed an affinity for digging in the sand, running around, chasing seagull feathers, playing with toys and shells, hiding under beach chairs and, once he tired out, napping in the sun with his humans. It seemed he was really in his element and he became a regular beachgoer with Meadows and her husband.

One day, when the tide was low and the waves were calm, Meadows allowed Pip to explore the water. “It didn’t bother him at all,” Meadows said.

Pip was so fascinated by the water that Meadows tried putting him on a boogie board. “He caught a little wave and stayed on the board,” Meadows said. “When the board hit the shore, he hopped off and just walked along the beach like everything was normal. That’s when we knew that Pip was a very special cat." 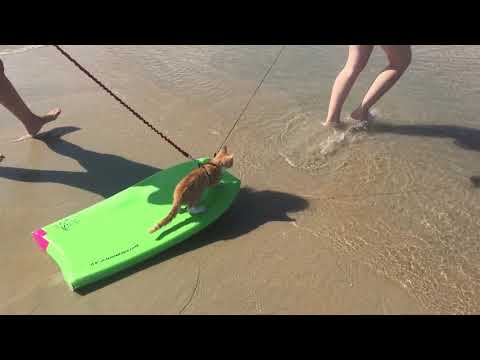 He even turned out to be a strong swimmer who enjoyed splashing around in the shallows.

Pip’s antics gained him a lot of attention from a growing number of fans. “After several trips to the beach, Pip was getting videoed and photographed by [tourists] and residents,” Meadows said. Someone showed a video to the local news station and Meadows was contacted about a story on Pip.

Unfortunately, all of the attention highlighted the fact that Ocean City laws prohibit pets on the beach during peak seasons, so Pip needed to fly under the beach patrol’s radar. He was always a good sport about hiding in the sand if they walked past, though.

Luckily, the beach wasn’t the only place in Pip’s hometown for him to explore. There was the boardwalk …

“There was a huge outpouring of support from the local community when Pip wasn’t going to be allowed at certain fundraisers/events, so we had lots of businesses welcome Pip with open arms and say he is allowed on their ‘private properties’ on the boardwalk anytime he wants,” Meadows said.

Meadows found several pet-friendly beaches and areas to let Pip continue his love of exploring while still respecting the laws, and he stays active with off-season activities such as paddleboarding …

… bike rides in his favorite backpack ...

... and dressing up in costumes.

He has even taken a few trips to places like Savannah, Georgia, and New York City.

In fact, Pip recently “wrote” and published a book of his very own about all the places he likes to explore in his hometown and the adventures he has.

“When someone filmed [Pip] on the beach and sent it to the news, that’s when we thought, ‘Well, it’s great to have a famous cat, but I would like to do some good for the community,’” Meadows said. “That’s how The Little Pip Project was born, as well as Pip’s weekly volunteer and outreach to various organizations like nursing homes, developmental centers and schools.”

Meadows created “Little Pips” — a stuffed animal that looks just like Pip — so that fans could enjoy their very own Pip whenever they liked. “We give a Little Pip stuffed animal to someone in need for every one that is bought,” Meadows said. Little Pips have been especially popular with the nursing home community, where some residents lived their entire lives with cats but hadn’t seen a real one in years due to their living circumstances, according to Meadows.

Pip’s impact spread far beyond the local community thanks to social media, and Meadows received letters and emails from people around the world describing how Pip had helped them through a tough time. One couple who had been in a horrific car crash wrote Meadows to tell her that watching Pip’s adventures each day took their minds off of the terrible things they were experiencing, according to Meadows.

Perhaps most importantly, Pip helped Meadows overcome some of her own difficulties — particularly phobias of hospitals, nursing homes, blood and IVs related to a childhood trauma she experienced. “I never in a million years thought that I would overcome this phobia,” Meadows said.

“Having Pip with me [while volunteering in those places] really helped, and now I can take a step back and see how seriously helpful animals are when it comes to emotional support. At the end of the day, Pip has changed my life and helped me emotionally as much as he has changed everyone else’s — I’ve never felt more stable from a mental health perspective than I have since working with Pip on a daily basis and having him go with me everywhere," Meadows added.

Meadows and her husband recently started fostering kittens through Town Cats of Ocean City, and you can be sure that Pip has been keeping them entertained and showing them the ropes.

While all of this activity may seem like a lot for just one cat, it’s actually the perfect amount for Pip, who needs to stay active to keep himself out of trouble. “He just wanted to try new things and that helped him calm down a lot at home,” Meadows said. “[He likes] learning too — clicker training also really helped.”

Not that he doesn’t enjoy the occasional downtime.