People are doing everything they can to help them.

Update: Following the investigation, the Pet Blood Bank will close its doors and the greyhounds will be up for adoption.

Pets sometimes need blood transfusions, just the way people sometimes do — but a new investigation suggests that blood coming from a blood farm in Texas is sourced from approximately 150 ex-racing greyhounds who are caged and suffering.

An anonymous former employee at the Pet Blood Bank observed and documented greyhounds kept in wire cages in an old turkey shed in San Saba County, Texas. Photos and video show the dogs languishing in their small enclosures, pacing and turning around in circles. Some spend hours just digging holes in the ground.

The greyhounds also appear to be suffering from physical problems, like untreated wounds, ticks, tooth decay and overgrown nails that push their paw pads apart. The investigation also claimed that two greyhounds were even found dead in their cages during this period.

The dogs are taken out of these cages and put in crates to be bled, a process that takes three hours and takes 20 percent of their blood volume at a time, according to the People for Ethical Treatment of Animals (PETA), which published the former employee's findings last week. The documentation was purportedly recorded this year, as recently as two months ago.

"The photos clearly show dogs suffering from severe gingivitis and receding, painful gums and going mad in kennels," Daniel Paden, associate director at PETA, told The Dodo. "The whistleblower asked management to provide better care to the dogs, contacted various regulatory agencies, and then reached out to PETA after systemic neglect and suffering continued. The evidence clearly shows violations of Texas' anti-cruelty statute."

Immediately following the publication of the investigation, the Pet Blood Bank allowed a deputy from the local sheriff's office to visit the blood bank and then posted a statement on its website homepage: "We promised to keep you updated, so here is the latest news about our facility. It is important to note that the owner of the Pet Blood Bank is completely dedicated to honesty and transparency. In fact, the Pet Blood Bank was the first entity to request that local law enforcement investigate its property after allegations were made."

The statement then encourages people to view and share a local news segment that doesn't actually show any current footage of the facility, only a statement made by the deputy, which reads in part: "A deputy went to the reported location and met with the owner who gave him free and unlimited access to the facility. The deputy could see that all animals had food, water, and shelter and could find no signs of abuse or neglect and the animals appeared to be healthy."

The Pet Blood Bank did not immediately reply to The Dodo's request for comment on how the images shown in the investigation can be explained.

"The sheriff ignored PETA's offer to provide veterinary experts to assist with the investigation," Paden said, adding that Anne Hale, the veterinarian who had previously said the dogs appeared to be OK after a visit over the summer, changed her opinion after viewing PETA's evidence. Hale told the Washington Post that the facility was likely "cleaned up" before her inspection.

The Texas Greyhound Association (TGA) is conducting an investigation into evidence. While an initial visit on Sunday showed "no signs of the serious neglect shown in the PETA video," the TGA plans to further delve into the allegations by working in tandem with law enforcement, according to a statement. "The operator of the Pet Blood Bank advised us that he believed the video may have been taken several years ago when the facility was under previous ownership," the TGA said. "However, we are not yet satisfied." 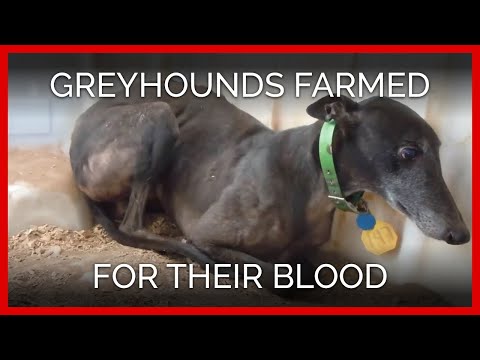 You can send a letter asking that these greyhounds are given over to a rescue organization. Your dog can also become a voluntary blood donor for animals in need.