Family Adopts Their Son And Dog On The Same Day

Jessica Banzhof was running a quick errand, returning food to a pet store, when she spotted Cupid.

The brindle pit bull was wearing a little sweater and looked so adorable that she couldn’t resist approaching him.

“I asked [the owner] if I could pet him and then I noticed that he wasn’t actually her dog,” Banzhof told The Dodo. “I guess it was just kinda fate that I met him.”

Cupid was hanging out in the pet store thanks to Dogs on the Town, a program started by Lucas County Canine Care and Control in Ohio, to help the shelter’s dogs get noticed by the community.

Banzhof immediately texted her husband: “I said, ‘I met this dog, and I love him. He’s so sweet and friendly and calm.’”

“My boys have been begging for a larger dog,” she added. “When I saw Cupid I thought, ‘He’s perfect.’” 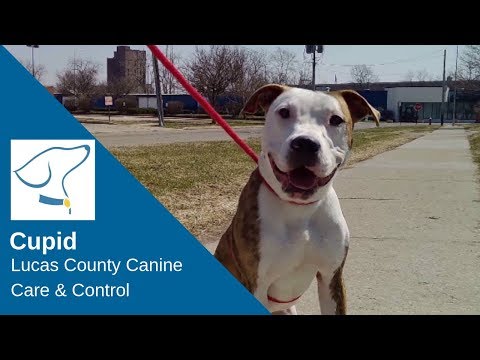 At the time, the Banzhof family was already in the process of adding another member to its ranks. Banzhof’s 10-year-old son, Gabe, was officially being adopted by his stepdad.

“For the longest time, when Gabe was little, it was just him and I,” Banzhof said. “I was a single mom and we struggled, but when my husband came along it was instant for him. My son has always been his son, his family has always accepted my son as: ‘That’s just our grandson.’”

Banzhof brought her family to meet Cupid and, as she expected, the pup got along with everyone — including their three small dogs. But after putting down the adoption fee for Cupid, Banzhof still wanted to sleep on the decision.

When Gabe’s adoption day arrived, no one anticipated just how emotional the trip to the courthouse would be.

“The judge asked my son, ‘Is this what you want?’ And he said, ‘Absolutely,’” Banzhof said. “Then she asked him why and he said, ‘Because I’ve been this person for so long, and I just really want to officially belong to a family who really wants, loves and accepts me. And I’ve been a part of that family, and I’m ready for my last name to match theirs.’”

After finalizing Gabe’s adoption, the family went out for a celebratory meal. Banzhof didn’t want the fun to stop, so she let her son pick the next activity: “I asked my son, ‘Well, we can’t stop celebrating, so what do you want to do next?’ and he said, ‘Let’s go get my dog.’”

When they arrived at the shelter, only Cupid’s excitement came close to Gabe’s. “He went in and was like, ‘It’s a double adoption day!’" Banzhof said. “It was the best day ever.”

Cupid and Gabe both posed proudly with their adoption certificates. And just like that, the family grew — and then it grew a little bit more.

Cupid hasn’t wasted any time settling into his new home. He loves to play with his brothers, run in the yard and snuggle on the couch.

“Cupid is still in his puppy stage, but he is so well-behaved,” Banzhof said. “He listens perfectly, he sits, he stays, he’s crate trained and we kind of feel safer now too.”

After just a week together, there is a new normal in the house — and the Banzhofs couldn’t be happier.

“Everything feels like we’ve gotten our contentment back,” Banzhof said. “It’s like, ‘We did it. We’re a family. We’re a whole.’ And then with Cupid, it’s like he was that little piece that made the puzzle complete."

“Now my boys have their dog,” she added. “It’s just perfect.”