Dog Shares A Quiet Moment Bird-Watching With His Best Friend

When Bo the beagle first met Jasper the cat, the two weren’t sure what to think of each other.

The young puppy was naturally timid, especially around a cat. And Jasper wasn’t sure if he could trust the tiny new addition to the family. Lisa Olsen-Plummer knew they’d need some time to get used to each other — but she didn’t anticipate how quickly quickly they would become best friends.

“Jasper was very cautious of Bo at first,” Olsen-Plummer told The Dodo. “He stayed back and watched from a distance until one day, he went up to Bo and put his arm around him.”

“It was almost like he was telling him, ‘It’s OK! Let’s play,’” Olsen-Plummer said. “I think that’s where Bo learned the hug from.”

From that moment on, the brothers have been as close as can be, constantly playing together.

“They play hard and instigate one another,” Olsen-Plummer said. “Sometimes, it causes a fight and I make them split up — just like kids.”

But it’s in the quieter moments that their mom sees the depth of Bo and Jasper’s bond. When the two aren’t locked in battle, they enjoy sitting on the sofa together, gazing out the window at the birds who visit the yard.

Last week, Olsen-Plummer was in her living room when something adorable happened: Bo jumped on the sofa and took a seat next to Jasper. He then wrapped his arm around Jasper and showed him some love in the sweetest way. Luckily, Olsen-Plummer had her phone handy.

You can watch the adorable moment here: 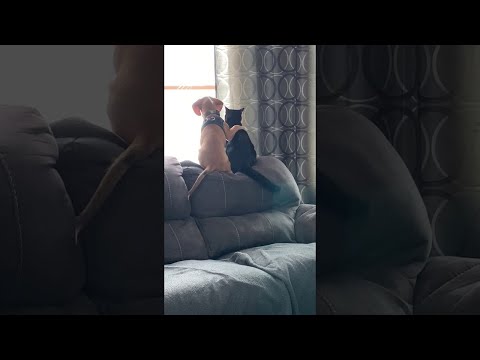 “They were enjoying the sunny day watching the birds,” Olsen-Plummer told ViralHog. “I was super excited to catch this beautiful bonding moment of two animals showing love for one another.”

The clip has since gone viral, spreading the message across social media that sometimes it doesn't take a lot to be content — just a sunny day and a good friend.