Not only is he a very good dog, he’s a very charitable one too.

Being an energetic and inquisitive Bernese mountain dog, Davos has a special knack for tracking down and retrieving things that most people would probably miss. But rather than let his talent be spent in vain, Davos and his owner, Al Cooper, have found a way to put it to some very good use.

Cooper likes to golf, though he admits he's pretty lousy at it. So, for the last few years he's been bringing Davos along to do his thing while playing at his local course in Minnesota. Turns out, anytime Cooper hits a ball into the rough and out of sight, his faithful canine caddy is more than happy to hunt it down.

During his recovery duties, Davos often ends up stumbling upon balls other golfers have lost. He finds so many, in fact, that it inspired a very good idea.

Davos and Cooper have begun selling all those lost golf balls at the course for 25 cents each — with the proceeds going to benefit other pets at the Animal Humane Society. And now the enterprising pup's retrieving talents are paying off in the best possible way.

In fact, according to KARE 11 news, the dog-run charity has already sold a whopping 400 balls, resulting the collection of $100, all from Davos' own efforts.

The news station recently caught up with Davos and Cooper as they dropped off the money they earned so far. 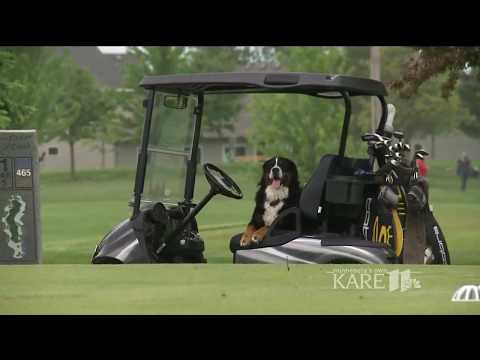 Thanks to that local news report about Davos' donation, his lost golf ball business is now booming.