Random Dog Walks Onstage During Concert And Gets Rounds Of Applause

Even the orchestra started laughing 😂

It usually takes countless hours of practice with a musical instrument, and untold levels of dedication, to land a spot onstage with a world-renowned orchestra — but this pup decided to just go ahead and skip all that. And sure enough, his impromptu "performance" was more than well-received.

During a recent concert at the Ephesus Antique Theater, in Turkey, the Vienna Chamber Orchestra was joined, quite unexpectedly, by the congenial old dog who proceeded to settle in next to the first chair violinist. His appearance, happily, drew a rousing round of applause from concertgoers, and even members of the orchestra couldn't help but smile to be so sweetly upstaged. 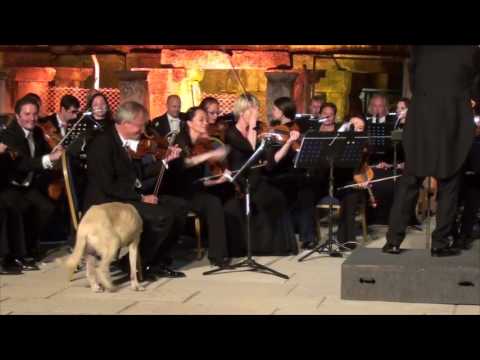 In a review of the concert, Turkish news outlet Medya Ege called the dog's appearance "the most interesting event of the day." It's unclear if the pup has an owner, or if he's one of Turkey's often well-treated strays — but the warm reception he received from the crowd just goes to show that everything is better when a dog is around.