Does Your Cat Miss You When You’re Gone?

Could your cat be knocking over that water glass because … he loves you?

The feline temperament has bewitched humans for the last 9,000 years. Yet with all that relationship history behind us, decoding cat behavior is still as challenging as trying to read hieroglyphics.

Of course, that doesn’t stop cat lovers from trying — especially when it comes to guessing how our cats really feel about us.

For many pet owners, spending extended time away from their beloved animal produces feelings of guilt and sadness. But is your kitty thinking about you as much as you think about him? Or is it possible cats are content as long as there’s food in the bowl?

According to Dr. Elizabeth Stelow, chief of animal behavior services at the University of California, Davis, there are some clear signs to suggest that our cats do miss us — they just don’t reveal their feelings the way we’d expect. However, camps are split as to whether these antisocial behaviors are really signs of attachment or just catitude.

“There is great debate about how much cats mind their owners leaving,” Stelow told The Dodo. “One study showed that some cats show signs of separation anxiety when left; these cats were most likely to urinate outside their litter boxes or be destructive. Another study showed that cats don’t attach to their owners in these ways, and respond to strangers in the home the same way they respond to owners.” 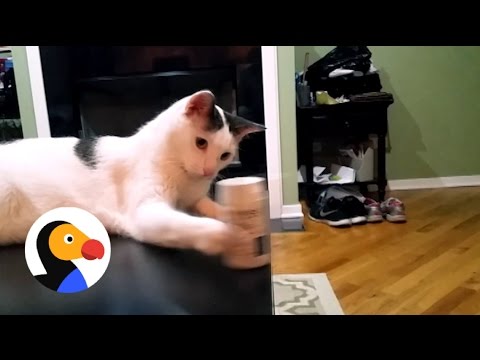 Is it possible that our felines' passive-aggressive behavior is their way of getting back at us for leaving them alone? Measuring a cat’s attachment to his primary caregiver can be tricky, as most are not eager to beg for our affection the way dogs do.

“In dogs, we have used affection (choosing physical proximity and interest in being petted), willingness to do things we ask of them and distress when we leave, among other things, as signs of attachment,” Stelow explained. “In cats, we don’t use some of the same measures because we expect less of them.”

With cats, simply allowing their owner to give them a scratch behind the ears can speak volumes. “We typically rely on their desire to be close to us and be petted as a measure of attachment,” Stelow said. A cat’s willingness to perform for us cannot be measured as a sign of attachment, Stelow noted, because while some cats are trained to do tricks, most are not.

If you feel like you have a bond with your cat, the good news is that the feeling is probably mutual. (And, if your cat follows you into the bathroom or sleeps on your face, it’s hard to believe you don’t have a special relationship.)

However, researchers are still debating whether cats can feel love or secure attachment for their owners at all. “Cats exist along a continuum from very aloof and unattached to very interactive and demanding,” Stelow said. “Is any region on that spectrum indicative of true attachment? That’s the million-dollar question.”

“That said, cats domesticated themselves,” Stelow added, “so there must be something in the relationship for them.”