"She buried her head anywhere she could and stayed flat on the floor, hoping to become invisible."

When Loretta was dumped at the San Bernardino City shelter, she was still named "Mamas."

After overbreeding and neglecting her, Loretta's owners just dumped her. The size of her teats suggested she had had a litter of puppies very recently.

"I’ve never met a dog so fearful," Kelly Reeves, president of Paw Prints in the Sand Animal Rescue, told The Dodo. When she was dropped off at the shelter, Loretta couldn't stop shaking.

"She was too afraid to walk," Reeves said. "I had to carry her to my car, in and out of the vet and into my house. She buried her head anywhere she could and stayed flat on the floor, hoping to become invisible." 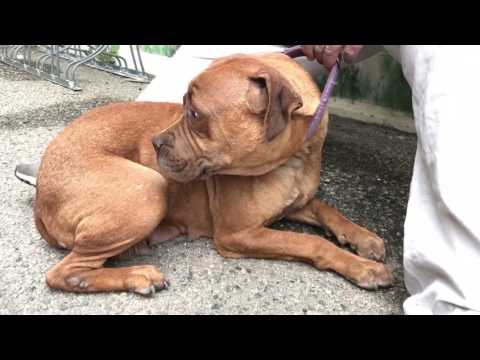 For the first few days after being surrendered, Loretta could hardly look at anyone.

"The puppies were likely recently weaned," Reeves said. "The people will sell them while they dumped their breeding machine. There’s no way of knowing how many times they bred her ... With every one ‘Loretta’ we rescue, there are thousands out there that still suffer like she did."

Luckily, Reeves and her organization arranged for Loretta's rescue from the shelter — she's currently in a loving foster home where she's learning how to trust people, probably for the first time in her life.

And Loretta is already opening up to her new life. "She is doing great in foster care," Reeves said. "She is starting to walk on her own, explore, and we even got a tail wag over the weekend."

Eventually, Loretta will be looking for a permanent home. But no one wants to rush her after all she's been through.

"We want her to learn to feel safe in a home and around people, gain confidence and get used to being in a family situation before she’s adopted," Reeves said. "We never know how long that will take. Every dog is different. Until then, she’s getting lots of love and care."

To follow Loretta's progress and apply to adopt her when she's ready, you can follow Paw Prints in the Sand Animal Rescue. You can also apply to adopt one of the other dogs the organization has rescued or make a donation to help.