Climate change is poised to strike sharks where it hurts - right on the snout.

To hear biologist Danielle Dixson say it, sharks are like big noses with fins. "Chemical cues are really important for them," she says in a statement, "in terms of finding food."

Dixson, a professor at Georgia Institute of Technology, and her colleagues recently looked at how climate change affects the way sharks smell - and the results aren't promising.

The biologists observed smooth dogfish swimming in a divided tank- sort of like a pool with separate lanes - split in half by two plumes, pumping seawater down the left and right sides. One plume contained normal seawater; the other emitted water with varying levels of carbon dioxide. Sharks avoided the side with the highest carbon dioxide levels (reflecting what ecologists predict conditions in the ocean will look like in 2100).

A dogfish shark follows the source of a food smell. (YouTube/Georgia Tech) 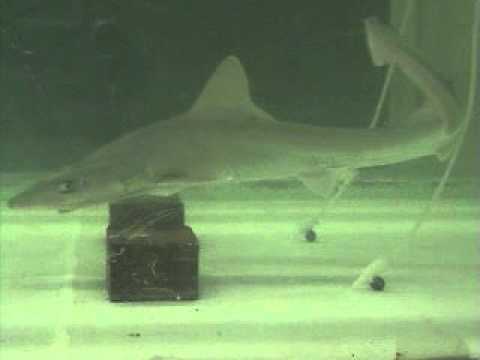 As the effects of climate change become more pronounced, scientists are keeping a watchful eye on the way animals react to shifting environments. It's the first time that sharks have been shown to behave in this way, but an earlier study from Australian researchers found that higher levels of carbon dioxide in seawater impairs the ability of fish to sense predators.

Although sharks come from an ancient lineage, the oceans are acidifying at a pace up to 10 times quicker than at any other point in the last 70,000 years. "It's the rate of change that's happening that's concerning," Dixon says. "Sharks have never had to deal with it this fast."