"We had to do something to make a difference in that dog's life."

An old dog named Bear, who spent 15 years chained to a dog house, is finally feeling loved for the first time in his life.

"We received a call about a dog in need of a dog house," Robert Misseri, founder and president of Guardians of Rescue (GOR), said in a statement. "But when we got there, it was even worse than that."

Rescuers discovered that Bear had spent his whole life at the end of a heavy chain in his owner's backyard in Suffolk County, New York.

"We knew then and there that we had to do something to make a difference in that dog's life, and so we did," Misseri said.

Luckily, the dog's owner agreed to surrender Bear to GOR so that he could have a chance at a real life. 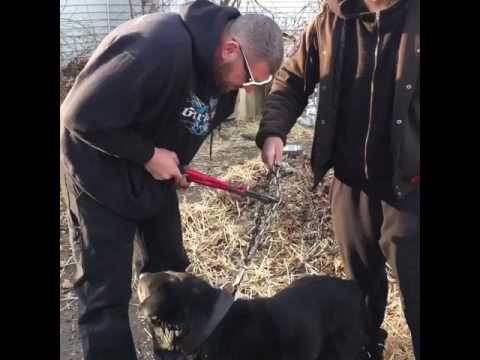 After cutting Bear free from his chain, rescuers took Bear straight to a spa for grooming.

And the love didn't stop there. Rescuers brought Bear to Port Jefferson, New York, so he could see the beach for the first time in his 15 years on earth.

Bear played with the ducks and seagulls and stood for a long time with his paws in the water.

"He loves the sand between his paws," one rescuer said, as they walked Bear along the shore.

This is only the beginning for the old dog. Rescuers know that Bear has a lot of catching up to do, so they plan to take him to dog parks and on car rides so he can see the world he's missed for so long.

After his day at the beach, bear had another treat in store for him: his first "puppuccino."

"One phone call from someone in the community set the wheels in motion that have changed Bear's life," Misseri said. "That's a true success story and why we exist."

If you're interested in giving Bear the home he always deserved, you can contact Guardians of Rescue at info@guardiansofrescue.org or 631-891-8430.