5 Reasons Not To Eat Turkey This Thanksgiving

Thanksgiving: so synonymous with the turkey that many of us simply call it "turkey day." From turkey decorations to turkey scented candles (yes, they really exist!), Thanksgiving doesn't seem complete without turkey... but it's time to take turkey off the table, because the death of an animal is no way to celebrate thankfulness.

Unfortunately, millions of Americans are unaware of the plight of turkeys and the incredible beings they are capable of becoming when given the chance to thrive. But, this Thanksgiving, I'm thankful to live in a time where I can share that information with all of you. So, please, before you head to the grocery store this Thanksgiving, get to know the beautiful bird with these 5 facts:

At Catskill Animal Sanctuary, we have seen first hand that turkeys form deep friendships. And not just with other turkeys! Henrietta the turkey and Atlas the goat, pictured below, shared a special bond. Henrietta and Atlas often snuggled up in a bed of straw, unphased by their species difference. Also, many visitors to Catskill Animal Sanctuary are shocked to learn that turkeys have human friends! Turkeys are often in the center of every CAS tour, following visitors around and sometimes, if you let them, they'll even plop into your lap!

Unlike baby songbirds and other tree-dwelling birds whose mothers are gone from the nest for long periods of time, turkeys rely on constant watch from their moms. In fact, young turkeys freak out if they get separated from mom! But, thankfully, baby turkeys have a special "lost call," and turkey moms will come running to their rescue. Perhaps even more amazing, turkey babies and moms communicate to each other while babies are still in their eggs! Unfortunately, turkey babies on factory farms never get to meet their moms. Turkey eggs are hatched in giant incubators, with no mom in sight.

Those of us who work at animal sanctuaries know how musical turkeys can be. Catskill Animal Sanctuary Founder and Executive Director, Kathy Stevens, recalls a story of a turkey named Ethel who entertained dozens of visitors when she sang along with musician Marc Black at our annual Shindig event. "It was so interesting!" says Stevens, "First Ethel hurried out of the barn as soon as she heard the music, then positioned herself in front of Marc, who was standing at the mic with a guitar. Marc would sing a line, then he would pause, and with every pause Ethel would chime in with an enthusiastic ‘gobble gobble gobble!' Marc laughed, I laughed, and our guests were amazed and delighted. It was a wonderful teaching moment." Below, CAS Camp Kindness kids sing "You Are My Sunshine" with Ethel and her friend Blue. 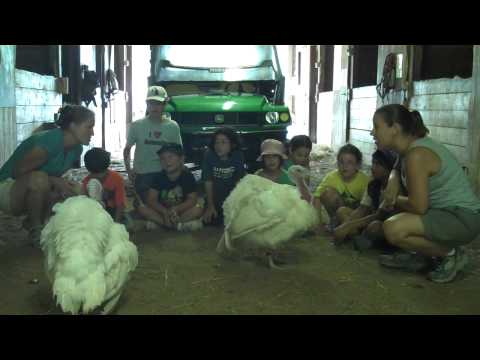 To meet the demand for their meat - with 46 million birds slaughtered for Thanksgiving alone - growers house turkeys in cramped warehouses. To keep the birds from killing each other (something they would not do under normal circumstances), parts of the turkeys' toes and beaks are cut off without pain relief. Imagine having the tips of your fingers cut off with a pair of scissors. Despite the cruel measures taken to prevent the turkeys from killing each other, many turkeys on factory farms die before slaughter. To make extra profit, turkeys have been bred to grow as large as possible. How large? The average turkey raised for meat now weighs up to 28 pounds, far larger than the average 17-pound turkey in 1970. To put this into context, it's like an 18-week-old infant weighing 1,500 pounds! Sadly, the extreme weight of their bodies causes turkeys to become lame and even causes heart attacks.

No matter how you look at slaughter, death is always inhumane. But, despite this fact, slaughter for birds in the United States is especially cruel. How so? Turkeys and other birds are not protected by the Humane Slaughter Act, which means they do not need to be rendered senseless before slaughter. Typically, birds necks are sliced by a blade, killing them, and they are then sent to a defeathering tank - a scalding hot tank of water that removes their feathers. Many times, however, turkeys' necks will miss the blade at the slaughterhouse, sending them fully conscious into the water meant to defeather the bird. In layman's terms, the birds are boiled alive.

There you have it, friends. Turkeys are amazing creatures who do not belong on the Thanksgiving table. Put up the turkey decorations, even light the turkey scented candle, but skip the meat this year and every year to come. My favorite vegan "mock meat" brand, Field Roast, has a Hazelnut Cranberry Roast En Croute that is truly delicious. Plus, many of your favorite Thanksgiving dishes are probably already vegan or can easily be made vegan! Candied yams? Use Sweet and Sara's vegan marshmallows! Vegan stuffing? So easy! For more Thanksgiving recipes, check out Catskill Animal Sanctuary's very own Chef Linda's blog. Even better, start a new tradition of sponsoring a turkey! Check out Catskill Animal Sanctuary's turkey sponsorship page for all of the added perks that come along with your generous donation.

On behalf of the turkeys, I thank you and wish you a very happy holiday from all of us at Catskill Animal Sanctuary!