This cat has a really special relationship with a can of olives.

It all starts out innocently enough when the cat's owner offers the kitty a quick sniff of the can.

"What's this all about?"

But it's immediately clear that this cat's feelings about olives are intense. Like, really, really intense.

Dr. Robert Proietto, a veterinarian in New York City, told The Dodo that cats often express enjoyment by rolling around on their backs. "Cats will show similar behavior with other smells, treats and even companions (human and animal) that they like," he said.

It turns out there's some science behind the cat's euphoric reaction, too. According to cat behaviorist Jackson Galaxy, olives contain a chemical similar to the one in catnip. So, it's not surprising that this cat gets so blissed out after just smelling the can. Like catnip though, not every cat will react the same way to the smell of olives. Hopefully this owner let his cat have a little nibble after the camera stopped rolling.

Check out the full video here: 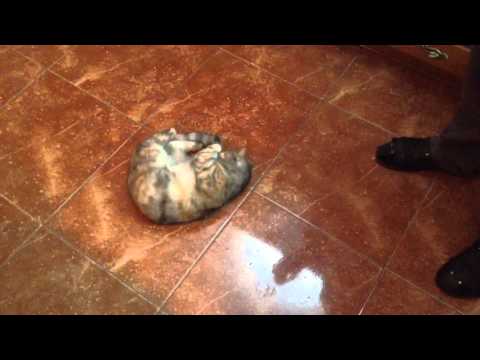 This story has been updated to include a statement from Dr. Robert Proietto.