What It's Like To 'Trap' A Cat Who's Terrified Of People

Not so long ago, there was a site in New York City's Harlem that, like many areas in the city, was overrun with stray cats - about 18. Even with that number of cats, the potential for an explosion of kittens was mind-boggling, and my fellow rescuers and I knew we had to do something.

Among the standouts, we had Crispy, the black and white patriarch of the colony. Years of frostbite and catfights had made his ears misshapen and, well, crispy-looking.

We also had a strong orange tabby contingent - Julia, Minx and, of course, a Garfield and Odie. For months we brought them food each day.

But cute as it was to see the crowd line up at chow time, any cat rescuer could tell you the four-block area was a disaster. Only a few of the cats were spayed or neutered. My rescue partners and I could tell because most didn't bear the telltale ear tip.

In case you're wondering, vets slice off just the tip of a cat's ear when they're anesthetized for spay/neuter surgery if the cat is going to go back outside. That way, any other rescuer knows they don't have be rounded up and fixed. Cats don't seem to mind at all - I've watched it happen!

When we first came across the Harlem site last May, only three of the feline residents were ear-tipped. Female cats usually have three litters a year, and each litter has around four to six kittens, though about half of the kittens born outside don't survive - which is its own sad story and a big part of the reason we do what we do.

Of the ones who do survive, by the time they're only 4 or 5 months old, they can start having their own kittens. That's A LOT of new kittens.

I haven't even mentioned the fact that many of the cats were just as friendly as any pet cat. Julia would head butt my hand for pets when I stopped by with food.

We wanted to give her and the other friendlies a chance at being indoor cats. Although the site is relatively safe in terms of the typical outdoor cat killers - traffic, malicious neighbors - life out there would probably still cut a cat's life short by many, many years. 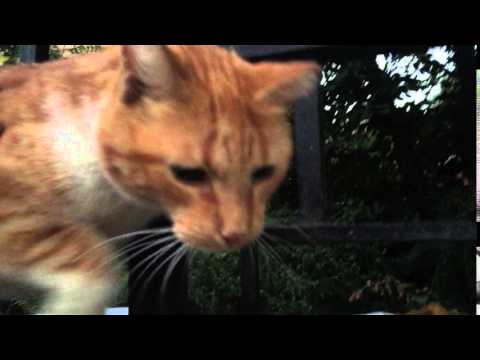 So one by one by one we caught the cats in humane traps. It works like this: We bait the trap with tuna or sardines (believe me, I can't bear the thought of eating either anymore) and prop the door open. A cat tiptoes in, unable to resist the fishy aroma, steps on the trip plate and the door snaps shut.

We caught Crispy, no problem. For all his street savvy, he marched right into the trap. Unlike Julia, Crispy turned out to be pretty far on the feral spectrum, so we decided to take him right back outside after he recovered from being neutered.

But most of the cats showed signs of being social - like Fritz Fiddler, who from the roof of a two-story building in the area would meow out what sounded like his very own version of Broadway show tunes.

He looked panicked in the trap, but his sweet purrs made us confident he'd blossom indoors. And that he has, at a forever home in Connecticut.

But things don't always go so well, and cat rescue is not a fast job. Months into our rescue, there is still one left from the original 18. Mocha the kitten.

The kitten who defies our every trapping attempt.

And I use "kitten" in the loosest sense, because after six months of slipping through our fingers, she is probably now an adolescent 9 months. And I am guessing "she" is a she because at the last standoff between Mocha and the trap, I noticed a belly bulge suggesting the worst - Mocha could be pregnant.

We trapped Mocha's likely littermate, Gwyneth, late in the summer. Like Crispy, whom we'd often see her running with, she walked right into the trap. She then had a pretty intense parkour session at the vet, but was young enough still to be socialized at a dedicated foster home.

Mocha might be too far gone for that. But we at least can't let her have her babies out there.

So the hunt for Mocha continues. My rescue partners and I take turns. Every week the same routine: set up the trap in the evening (around the time the pride expects its meal delivery) and let the hours-long standoff between Mocha and the trap ensue.

Once, probably because we made our attempt on the later side, a raccoon scampered into the trap. We knew that was a risk: The City of New York uses the same traps we do to catch raccoons. Blissfully unaware of his clear and present danger, the little critter would've been good for a chuckle - except for a larger, rather motherly raccoon hunched within pouncing distance. Never before have I wanted a Go-Go Gadget Arm as much as when I stood back and slid the door of the trap up to free the little guy.

We have started to up the ante for Mocha. Two of my rescue friends now make a pit stop at a deli on their way to the colony. Their order is always the same: fried chicken.

Maybe tuna and sardines aren't working to lure Mocha into the trap because she doesn't have a taste for seafood. Hey, I never caught a cat so fast as the time I baited the trap with KFC Original Recipe! (Pro tip from our rescue vet.)

We aren't giving up on Mocha. We owe it to her - and to any kittens she may have. Although she is the last of the original 18, we won't be done trapping at the site even after we get her.

Many times we show up to trap, or to give Crispy his daily bread, and we see a new cat in the area. Often scared and almost always hungry, we are pretty sure these newcomers are abandoned pets. We are working on getting them now, too.

Even after Mocha, there will always be more. It is just about the only certainty in cat rescue.

Update: Mocha was caught in late April and taken to the ASPCA, where she was spayed and got a checkup. They noticed that she was lactating - her rescuers are looking for her kittens.