Cat Schools Human In Jenga Because Cats Are Good At Everything

Cats are most definitely under the impression that they're smarter than humans. While they can't always outsmart us, sometimes they totally can - even at our own games.

An older video has been making the rounds again of a cat whose human taught him to play Jenga. But actually - this cat really can play Jenga.

The cat learned to nudge pieces with his nose, then remove them with his paws, very carefully.

It seems he likes the game so much that he tries to cheat and take his turn before his human's is over. Sneaky cat, wait your turn!

He also doesn't seem to be a very good loser - when his human made a good move, the jealous cat tried to knock his human's piece back off the tower. Come on, cat. No one likes a sore loser! Even his human says, "That was bitchy."

Regardless, it seems like this cat really love Jenga, so he'll have plenty of time to work on his good sportsmanship. You'll get there, cat. Happy playing!

Check out the full video of this badass Jenga-playing cat below! 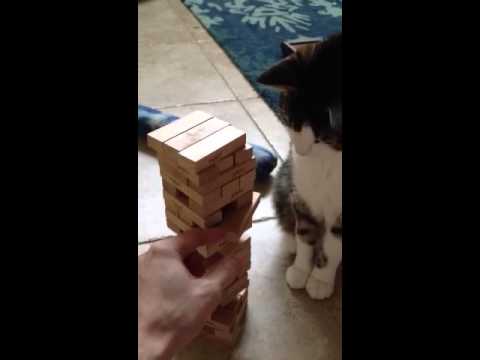