Can A Cat Teach A Squirrel To Purr?

Can a cat teach a squirrel to purr?

Don't get too excited.

This video shows a very cute mama cat who is nursing an orphaned squirrel: 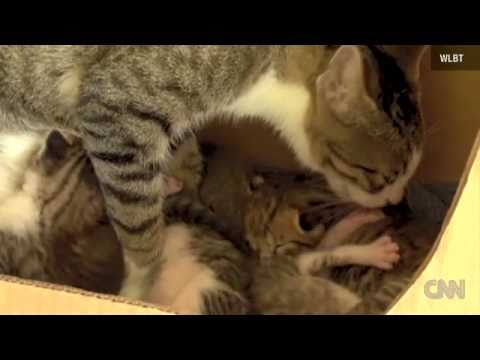 The story received over six million hits on Youtube, and there are lots of reasons we may find it irresistible: the cuteness of the animals involved; the "surprise" of a cat taking care of what would normally be potential prey – a baby squirrel; and the exotic-ness of raising a wild animal.

It's not unusual for an animal to take care of another's young – cooperative or social breeding is common in the animal kingdom, from ants to birds to primates [1]. In these situations, usually relatives help care for the family babies, assisting mom by providing various levels of care.

Cross-fostering, or the care for another species, is not as common in the wild. One key exception is the case of brood parasites, birds such as the cowbird or cuckoo, who lay eggs in the nest of a different species, leaving the foster mom no choice but to care for their babies [2]. While not "naturally occurring", many experiments have also shown that animals of one species will care for the offspring of another.

So why (if you are a bird or cat or other animal...hmmm, even human) would you put time and energy into caring for another animal's offspring? Isn't the point to promote your own genes? It could be that the risk of not caring for a hungry face that presents itself to you is greater than the cost of doing some extra nursing or care, just in case that baby animal has some of your genetic material. Hormones may play a key role in this as well, as oxytocin produced in mother cats after kittens are born help make caregiving a priority [3] – and this caregiving may extend to baby squirrels, if they are presented at the right time (while the mom is nursing her own babies). And we humans, well, we are very susceptible to cuteness, which could in part explain why we take pets into our homes (but that's a topic for another time!).

And of course, when humans are involved, we are supplying most cross-fostering animals with supplemental care (be they mom cats caring for other kittens, puppies or squirrels, or animals living in labs) – and the costs of feeding another mouth are pretty small.

The big question – did the baby squirrel learn to purr?

So while we know mama cat provided this baby squirrel with nourishment, did she teach him to purr as the headlines claimed?

While true purring is attributed mainly to feline species, they are not the only animal that makes a purring sound. Purring sounds have been reported in foxes, racoons, badgers, and bears [4]! The main difference is that a true purr involves a several key characteristics which include occurrence during both inhaling and exhaling. Respiration during purring is higher than normal, and the frequency of purring is lower than normal vocalizing. The analysis of the "purring sounds" of other species indicates that they are different enough in sound structures that they should not be called "purring."

To learn more about the behavior and rehabilitation of baby squirrels, I recently interviewed a local squirrel rehab expert, Lila Talcott Travis. Lila is the Director of Yggdrasil Urban Wildlife Rescue in Oakland, and has been rescuing baby squirrels for over 20 years. Lila Talcott Travis said that from her experience "Squirrels make that buzz/grunt when they are happy to see someone and they want to play, cuddle or eat." Ground and tree squirrels have been reported to make purring sounds [5,6], and it is likely that this purr-like sound is just part of their regular range of vocalizations. So while many news reports (and even the title of the video) implied that the squirrel "learned" to purr from the cats, it is likely that this purring sound is just something Rocky would have done anyway!

Perhaps you are wondering (like I was) how often baby squirrels fall out of trees? According to one source "All the time," but most mom squirrels will retrieve the baby and carry it back to the nest. Lila mentioned that while well-intentioned, the people in the video could have brought Rocky to a wildlife rehabilitation center, where he could have been placed with other baby squirrels. Yggdrasil always fosters squirrels with other squirrels: "We never raise them alone - as in, they must be with other squirrels so they learn proper squirrel body language. That prevents them from habituating to human company and keeps them knowing they are squirrels."

Most squirrel rehabbers do release baby squirrels into the wild, so it's not a foregone conclusion that Rocky would not have been able to survive on his own. Travis notes, "Six weeks is early in the life of a rehabbed baby squirrel." Wild animals are not pets (nor are they legal to keep as pets in most states), and if you find an (apparently) orphaned squirrel, be sure to contact a wildlife rehabilitation facility near you for advice on what to do.

Find a wildlife rehabilitation center near you.

And if you are in the Bay Area and would love to foster adorbs baby squirrels, YUWR is an all-volunteer-run nonprofit wildlife center and they are always looking for foster care volunteers to train! Read more about what is involved at their website.

Photos via care2.com and Wikimedia commons.