When Everyone Left A War Zone, This Guy Stayed To Take Care Of Their Cats

"I'll stay with them no matter what happens."

"When people left, the cats started coming to me," Mohammad Alaa Jaleel, who lives in Aleppo, Syria, told BBC News.

Aleppo, the largest city in Syria, has been an almost constant battleground since 2012 as opposing forces have tried to gain control of the city.

To save their own lives, people fled the city of Aleppo - an estimated 40,000 of them.

Alaa started out with about twenty cats who were left behind as people ran for their lives, in addition to the strays he'd taken in. A year later there were over a hundred - and Alaa started a sanctuary known as Il Gattaro d'Aleppo.

"Some people just left them with me, knowing that I love cats," he said.

Now Alaa is known as "the cat man of Aleppo."

One little girl, who was in tears when she brought him her kitten just before her family fled, asked him to take pictures of her cat to send to her - so he does.

Alaa told the girl that he'll take care of her cat until she can come back.

"Since everyone left the country, including my own friends, these cats have become my friends here," he said. "I'll stay with them no matter what happens." 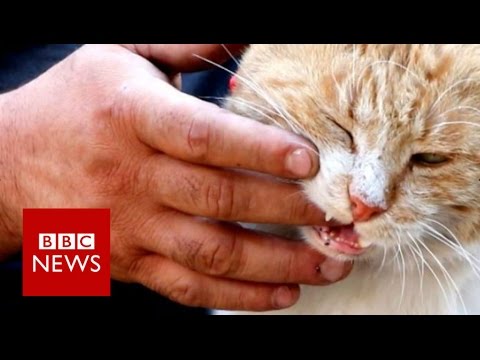 Read about other people who have stayed behind to save animals in Syria.