Everything Is Wrong With Horses In Public Streets

New York City forged a deal with the horse carriage industry over the weekend, aiming to keep the dubious tradition alive in the city, but substantially curtailed.

If approved by the city council, the last bastion of horse-drawn carriages in New York City will be kept within the sprawling Central Park. What's more, the number of licensed horses will fall from 220 to 95 by 2018, the New York Times reports.

"We are pleased to have reached an agreement in concept on the future of New York's horse carriage industry," the statement read. "We look forward to working together on the final details of this legislation and getting this passed."

In fact, the only stakeholders not cheering the plan appear to the most important ones: the horses themselves, and the advocates who fight on their behalf.

Horses, after all, have paid most dearly for the pomp and pageantry of this outdated tradition.

While New Yorkers for Clean, Livable, and Safe Streets (NYCLASS), an organization that has long criticized the carriage industry, admits the recent plan would be a "step in the right direction," representatives of the animal welfare group say the measure is not nearly enough.

Even in Central Park, horses would still share roads with cars, and, of course, be under the yoke of unscrupulous operators.

"Horses do not belong in a congested, urban setting," NYCLASS states on its website. "They constantly breathe exhaust while dodging dangerous traffic ... confined to the shafts of their carriage and their tiny stable stalls, with no access to green pastures."

Records obtained through New York's Freedom of Information Law (FOIL) revealed the industry's brutal track record between the years 2009 and 2014.

In that time span, there were 12 hit-and-runs, where a carriage horse was involved in an accident and the carriage driver fled the scene, according to Allie Feldman, executive director of NYCLASS.

The records, which included cases of children being injured and terrified horses running unrestrained down New York streets, cast an understandably harsh glare on the carriage industry. Less than a year later, another animal welfare group, Last Chance for Animals, published even more disturbing allegations in an undercover video.

According to the Animal Legal Defense Fund, at least nine carriage horses have died in New York City since 2006, some under particularly gruesome circumstances.

And yet, despite countless cases of carriage horses - and humans - in peril, the horse-drawn carriage remains a stark fixture on the urban landscape.

For their part, carriage horse operators, who are independent contractors, have long maintained the horses are treated humanely.

"We buy these horses from the Amish by the pound," a carriage driver told The New York Post in 2014. "If not for us they would be dog food and glue. The horses get better health care and more vacation than we do."

It's high time those behind New York City's carriage industry let go of this brutal industry entirely - as was the case in Salt Lake City, Utah, where the practice was banned outright in 2014.

If you want to join the fight, sign the petition here. 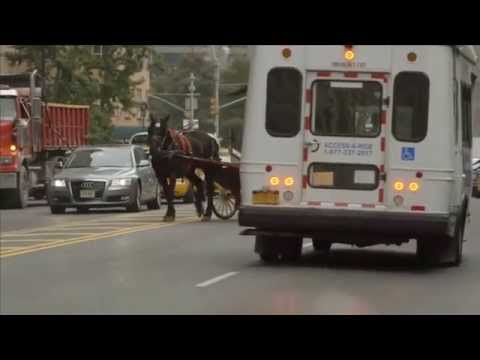