New York City's carriage horses continue to face violence - in some cases, from their own caretakers.

Last Thursday, animal welfare website Their Turn published excerpts from carriage horse trainer Norman Martin's memoir, "A Tough Son of a Gun." In the book, Martin describes his methods for "breaking" the horses in his care - including beating them with a "disciplining device."

"[The disciplining device] is a little stronger and stings a little more than a whip for the thick-hide horses," Martin writes. "But I only use it if I have to break strong ingrained attitudes and habits."

Martin also describes a horse control device he calls a "power line." He would use the implement to "pull hard and force his [the horse's] head against his neck, so he would choke himself until he passed out and fell down on the road," he writes.

Despite the violence outlined in his book, the New York Daily News recently cited Martin as a positive example in a report that aimed to prove carriage horse training is humane. 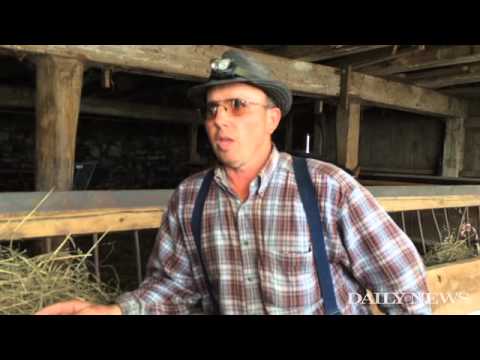 Animal welfare groups, including New Yorkers for Clean, Livable, and Safe Streets (NYCLASS), have roundly criticized not only Martin's admissions, but the pride he takes in his violent actions.

"It's an outrage that Norman Martin - in his own words - admits to abusing and torturing horses when they don't do what he wants," NYCLASS representative Allie Feldman told The Dodo.

"We are shocked by the admissions he makes in his book and urge authorities to monitor the horses in his care - horses that are clearly in imminent danger," she added.

Despite continued abuse and a disturbing number of traffic accidents, horse carriages continue to operate in and around New York City's Central Park. Last winter, carriage horses were forced to work through every single snowstorm despite treacherous travel conditions.

Although he promised during his mayoral campaign to end the use of carriage horses entirely, New York mayor Bill de Blasio announced a compromise deal on Sunday that would reduce the number of carriage horses in the city from 220 to 95 by 2018. The remaining carriage horses would be confined to Central Park, removing them from city streets.

The deal also mandates that a stable be built in Central Park to house 75 working horses at a time. The remaining 20 - a rotating group - would be out of the city and ostensibly resting.

Of course, all 95 remaining horses would be in the care of trainers before their deployment. Norman Martin is one of those trainers.

The Coalition to Ban Horse-Drawn Carriages criticized the plan. "Street traffic was never the reason we advocated for a ban," representatives said in a statement on Facebook on Monday. "There are many other reasons including the sensitive, nervous nature of the horses; the very high turnover, which leads us to believe many of the unwanted go to the kill auctions, and punishing working conditions."