She’s Lived In Solitary Confinement For 40 Years. We Can Set Her Free. 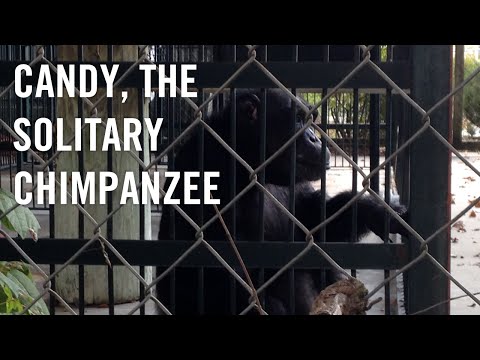 Candy the chimpanzee has spent her entire life - more than 50 years - entertaining humans. In her younger days, she appeared in stage acts with other chimpanzees and interacted with visitors to the amusement park run by her human owner. Candy now lives at the Dixie Landin' amusement park in Baton Rouge, LA.

"The conditions in which Candy lives are unconscionable," says Animal Legal Defense Fund Executive Director Stephen Wells. "She has lived alone for more than 40 years, in a barren metal cage with a few toys but no nesting materials and no interactions with other chimpanzees. Watching Candy rock back and forth in her cage shows the effects of imposing solitary confinement and deprivation of basic needs on an intelligent, social animal like Candy."

Local and federal officials have repeatedly cited Dixie Landin' for violating animal protection laws, including failure to provide veterinary and enrichment plans; having an insufficient barrier between Candy and the public, which makes it possible for visitors to throw items into her cage, including lit cigarettes; keeping Candy's food in a storage room filled with garbage; and feeding Candy out of receptacles that could cause her injury.

Learn more and how you can help.