It's been a long, hard road for Budi, a baby orangutan saved from a life of suffering as someone's pet, but he continues to wow rescuers in each stage of his recovery.

The determined little primate recently took his first steps with the help of his caregivers from International Animal Rescue (IAR). Although Budi is a little wobbly and halting on his feet, considering his life story, those steps are huge strides nonetheless.

When Budi was rescued earlier this year from his former owner in Indonesia, he was severely malnourished and showed signs of neglect after having spent 10 months locked in a small cage. At first, IAR workers weren't sure he would survive, but since then he's amazed them with his perseverance.

"It is hard to believe that this is the same little orangutan who could not move or even sit up and who would cry out in pain when touched," writes IAR on Facebook. "Our team of vets have done incredible work and it is so wonderful to see that there is indeed hope for Budi's future after all he has suffered!"

Even once he's mastered walking on his own, there are still other challenges that lie ahead for Budi, and his rescuers say he's ready to tackle them head on: "Budi is a little fighter who isn't going to give up until he is back in the trees where he belongs!" 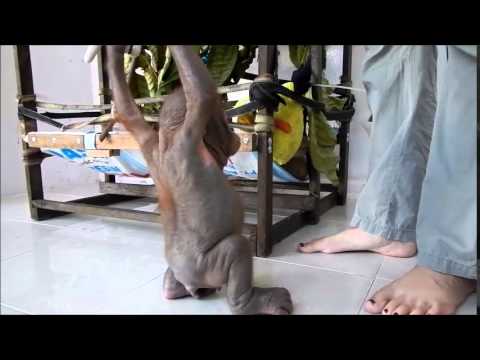 Visit International Animal Rescue's website to learn how you can help.