What Happens To Dogs When Breeding Goes Wrong

This is Noel, an all-white Australian shepherd.

Noel is completely deaf and partially blind. She has never let her challenges get in her way and she never will - but sadly, Noel's life didn't have to be this way.

When dogs with merle coats are bred together, also known as merle-to-merle breeding, it can result in what is called a "double merle," according to Deaf Dogs Rock, an organization that finds homes for deaf dogs. This can often lead to a lack of pigment in their ears, causing congenital deafness. If a dog has unpigmented skin in his ears, the nerve endings atrophy and die off completely within the dog's first week of life.

Each puppy within a merle-to-merle litter has a 25 percent chance of being born "double merle," Christina Lee of Deaf Dogs Rock told The Dodo. Being born "double merle" can lead to the afflictions mentioned above. "Some [canine] deafness can be caused by bad breeding," said Lee. "For example, merle-to-merle breeding ... has a 25 percent chance of causing deafness or vision impairment in each puppy born in a litter from [improper] breeding."

Some breeders don't take the health and welfare of the puppies into account, which can cause puppies who are bred improperly to become deaf or blind. What's worse, some breeders are instructed to euthanize a dog when he is born deaf, according to Lee. "We like to educate breeders that Deaf Dogs Rock can list [these dogs] as available for adoption or we can sponsor the deaf puppies into special needs rescues we work with across the U.S," Lee said.

Breeds with a higher rate of deafness due to improper breeding include Australian shepherds, pit bulls, Great Danes, Dalmatians and American bulldogs.

Noel the Australian shepherd is the product of improper breeding, but her family treats her just like a normal dog, finding her challenges to be the most beautiful parts of her. Noel has no real sense that she's different - astonishingly, her confidence and happiness grew out of an unfortunate past.

Pegasus the Great Dane is another victim of breeding gone wrong. Pegasus's entire litter died, except for her, and she wasn't expected to live for very long, either.

The man who adopted Pegasus filmed her progress to prove to the world that disability is beautiful and shouldn't be given up on.

Even though these dogs are the result of ignorant breeders, we should still give them loving homes and help them through their challenges, despite the circumstances under which they were born.

Breeders are simply not the way to go if you're looking to bring a new pup into your home. We can help prevent improper breeding by following the motto "adopt don't shop," and adopting dogs from shelters rather than buying from breeders.

Check out the full video about Noel below: 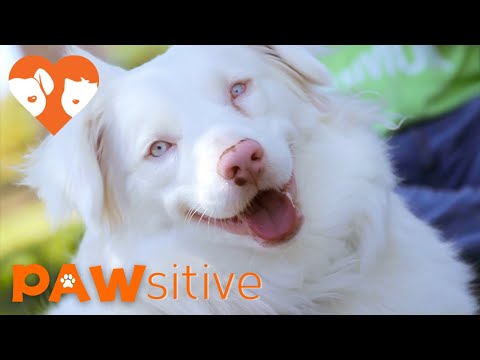