Two dolphins lived in a tiny swimming pool so that humans could play with them.

The dolphins had been captured and brought to a theme park in Turkey, where tourists could pay to swim with dolphins in the tiny pool.

Thankfully, Born Free Foundation launched a campaign to free them.

But freeing dolphins from captivity isn't easy. Because dolphins are so smart, they need to be challenged so they don't get bored. In captivity, dolphins don't receive the natural and adventurous lives they're built for.

Tom and Misha are two dolphins who lost many of their wild instincts and behaviors in captivity, so when they were rescued they were brought to a sea pen where they worked with special trainers for 20 months to ensure they had the skills needed to survive.

The dolphins went through extensive training to help them remember how to be wild.

Tom and Misha needed to relearn how to hunt for themselves.

Because captive dolphins forced to entertain humans spend 80 percent of their time above water, Tom and Misha needed to be taught that they are better off below the surface.

At first, they were scared to leave the human world they'd come to know.

But that didn't last long.

After their release in 2012, Born Free has been keeping track of the dolphins to ensure their long-term wellbeing. And Tom and Misha are thriving in the wild waters of the Mediterranean Sea and beyond.

A new report on the release of Tom and Misha is believed to be the most thorough yet, offering some important lessons for future dolphin freeing projects. We hope. 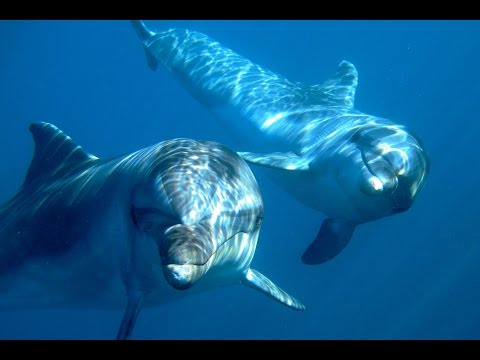