A cat who somehow became stranded off the coast of Turkey managed to survive the hair-raising ordeal - thanks a group of city workers, and a specially-designed boat which turned out to be perfect for saving less-than-cooperative felines.

While it isn't clear exactly how the exhausted cat ended up out so far from shore, chances are she wouldn't have lasted much longer. Fortunately, a clean-up crew from Istanbul's environmental management devision spotted her in time, and moved to pluck her from the sea.

Initially, the group tried to scoop the cat up with a net, but for whatever reason, the frightened animal resisted those attempts.

In a stroke of genius, however, the quick-thinking crew found another way. They engaged their boat's conveyer belt, normally used to collect floating ocean debris. And sure enough, as video of the rescue shows, it worked like a charm. 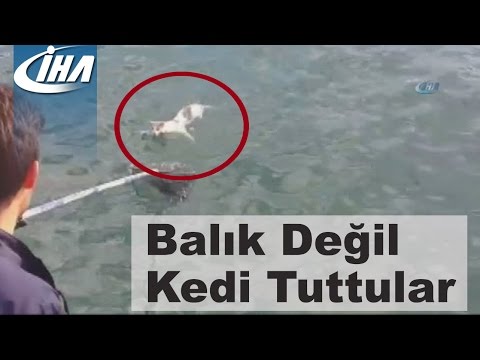 The clip above ends just moments after the cat makes it aboard, so we can only speculate whether she warmed up to her rescuers or tried to play it cool.

Whichever the case may be, what matters is that the cat survived her close brush with a watery death. As local news outlet Haber Turk reports, the lucky kitty was found to be in good health and successfully returned to dry land.